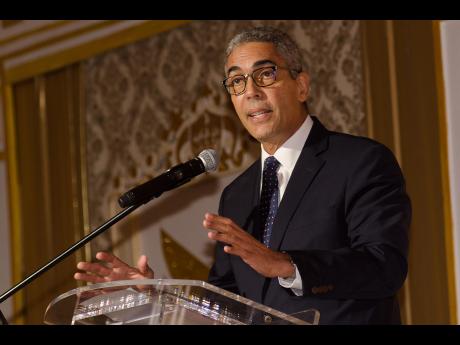 Seeking to quell market fears, chairman of Sagicor Real Estate X Fund, Richard Byles, said the billion-dollar loss reported in the September quarter was not an indictment of the company's performance, but rather reflected a dip in the price of Playa shares.

The company acquired shares in the Mexican hotel group under a deal in which entities in Sagicor Group Jamaica sold their resort holdings to Playa.

The Playa stock, which trades on the Nasdaq exchange, lost 12 per cent of its value during the quarter. That was enough to throw X Fund's steady earnings off track.

"The change in the share price - that is what created the situation," said Byles. "Playa is not worse off than the previous quarter financially, but it was just that the Nasdaq fell and Playa shares took a beating," he said.

But the market still thrashed the hotel stock. The resulting impact on X Fund financials was such that the company actually reported negative revenues of $246.5 million over three months to September and a net loss of $1.34 billion. Comparatively, it reported a profit of $1.57 billion in the September 2017 quarter.

The loss in the current period arose from a $1.27-billion capital loss on financial assets. It reflected the decline in Playa shares from around US$10.79 at the top of July to US$9.50 at the bottom of September.

The X Fund stock has mostly traded down since the financial report was released to the market. On Tuesday, there was an uptick in the price to $11.75 per share, but it's still well off its high of $14.83 this quarter.

Sagicor owns some 13 per cent of Playa, split between X Fund, which holds 9.4 per cent, and Sagicor Group Jamaica.

Byles said patient investors will benefit from a price rise over time.

"Playa hotel is a sound company. So there is a lot of upside. You have to be a bit patient. Put on your seatbelt and relax. To come out now is just to consolidate a loss," said Byles. "Nothing is wrong with the operations."

Playa finalised its acquisition of the Sagicor assets for a total consideration of US$308.5 million in June. Under that deal, Sagicor became the second largest shareholder in the hotel group.

The acquisition gave Playa ownership of Hilton Rose Hall; Jewel Runaway Bay; Jewel Dunn's River; Jewel Paradise Cove; 88 units comprising one of the towers in the multi-tower condo at Jewel Grande Montego Bay; development lands adjacent to Jewel Grande and the Hilton Spa; the management contract for units owned by Sagicor; and all the rights to the Jewel brand.

During the September quarter, earnings from Jamaica ranked this market as Playa's second most important zone.