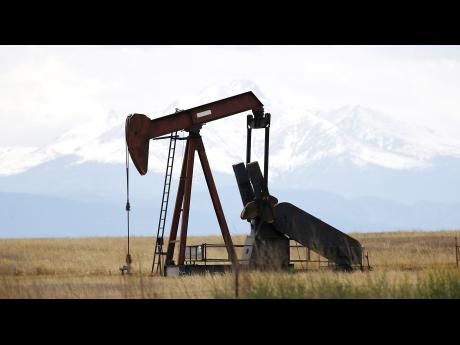 AP
An oil pump jack in operation at Firestone, Colorado. Oil prices fell more than five per cent on Tuesday, amid a decline in global markets.

Stocks were skidding up to midday Tuesday as weak results from retailers and mounting losses for big technology companies pushed the market back into the red for the year.

Energy companies are slumping because of a five per cent drop in the price of oil. Industrial companies are also dropping as the downward momentum in stocks builds after steep losses Monday.

Investors lately have been quick to bail out of companies that show rising costs are eating into profits, and that was the case with retailers Tuesday. Target plunged after reporting earnings that missed Wall Street's estimates due to higher expenses. Ross Stores, TJX, and Kohl's also fell on disappointing forecasts.

Katie Nixon, the chief investment officer for Northern Trust Wealth Management, said investors have been selling tech stocks because of signs that trade tensions between the US and China are getting worse instead of improving.

"A resolution doesn't seem to be coming in the short term," she said. "A lot of the companies that are front and centre [like] Alphabet, Apple, IBM ... could be significantly limited in the way they export their technology."

Investors continued to flee the technology giants that have led the stock market higher in years past. Apple fell three per cent to US$180.27 and is down 22.3 per cent from the peak it reached October 3, though it's still up for the year. Microsoft lost 2.4 per cent to US$102.13.

Tech stocks were among the biggest losers in Europe, too. Nokia and Ericsson, two top suppliers of telecom networks, each fell about three per cent. SAP, which provides business software and cloud computing services, was down over one per cent, as was chip maker Infineon Technologies.

At mid-afternoon US crude prices fell even further and were down by seven per cent to US$53.23. Brent dropped to US$62.80 in London.

Nixon said Saudi Arabia and other countries started producing more oil after the Trump administration announced renewed sanctions on Iran. But after that increase in production, the administration granted waivers to several countries that allowed them to keep importing more oil from Iran. That crated a supply glut that pushed prices dramatically lower.

Nixon said OPEC countries will probably cut back on oil production, but some investors are worried that the build-up in crude stockpiles is a sign the global economy isn't doing as well as expected.

Investors looked for safer options and bought bonds, sending their prices slightly higher. The yield on the 10-year Treasury note fell to 3.05 per cent from 3.06 per cent.

Nissan fell over five per cent in Asia as traders there got their first chance to react to the news that its chairman, Carlos Ghosn, who engineered a turnaround at the automaker, was arrested on charges that he underreported his income and misused company funds and will be fired.

Nissan said Ghosn and another senior executive, Greg Kelly, were accused of offences discovered during an investigation set off by a whistleblower. Kelly also was arrested. The Renault-Nissan-Mitsubishi alliance sold 10.6 million cars last year, more than any other manufacturer. Renault shares dropped 8.4 per cent on Monday and another 2.5 per cent Tuesday.