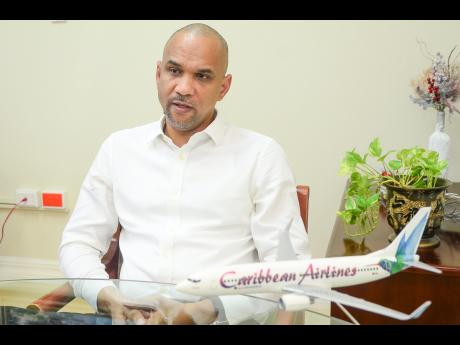 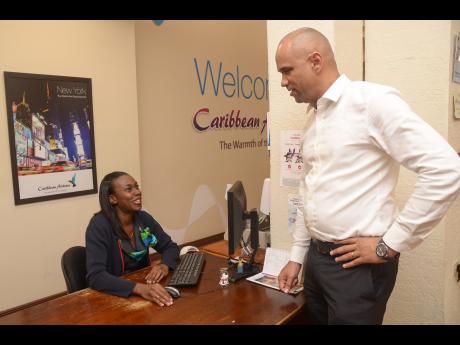 Quick on the heels of rare profits not seen in almost a decade, regional carrier Caribbean Airlines Limited, CAL, is pushing ahead with big expansion plans that are meant to maintain its momentum, including a travel and tour subsidiary to be launched next year and refreshing its fleet of jets.

The government-owned and Trinidad-based carrier, which reported a modest third-quarter profit this year after nine years of bleeding red ink, has its eyes set on what CEO Garvin Medera describes as "underserved intra-regional routes," including Cuba, the Dominican Republic and Haiti.

CAL It is also eyeing routes into Africa and locations in South America, inclusive of Suriname and Venezuela which it now serves. And it is even planning a return to London, where CAL, like Air Jamaica, which it bought and merged with in 2011, lost huge amounts before pulling the plug on that long-haul flight in 2016.

In an interview with the Financial Gleaner this week at CAL's Kingston offices, Medera said the planned expansion comes after the careful data-driven review of extensive historical performance and trends during eight months of non-stop strategic planning.

Medera did not address the issue of what the programme would cost, but said it would be financed from the airline's internal resources.

Under Medera's leadership, the airline - in which Jamaica has a 16 per cent stake and Trinidad & Tobago owns 84 per cent - reported TT$48 million in net profit over nine months ending September in a release of its unaudited financials.

Medera has headed CAL since October 2017, a job he took on notwithstanding the rapid turnover of bosses at the carrier, which in its 11-year history has had about five CEOs and three interim bosses who tried - and failed - to shake off years of operational inefficiency and financial losses.

Despite a TT$50 per passenger subsidy from the T&T government for the airbridge to and from Tobago, for the short hop, Caribbean Airlines still makes a loss of about TT$100 on each one-way ticket, of which it sells about a million a year.

The carrier's positive nine-month results this year is entirely due to its performance on international routes. CAL made TT$83 million on international and other operations, but reported a loss of TT$35 million on the domestic Trinidad-to-Tobago flight path that links the twin islands.

As CAL's CEO, Medera, whose track record in business was mainly in the telecommunica-tions sector, is both focused on growth as well as avenues to cauterise losses and boost efficiency.

Credit card fraud, which reportedly cost CAL millions of dollars every year, is said to be now down to "internationally acceptable" levels; and service to Caracas, Venezuela, has been scaled back to put the lid on financial risks from political and economic upheavals there. "We took a hit on Venezuela," is all the CEO would say on how much the airline lost in unrepatriated earnings.

A strategic plan for the airline has been signed off, and it details a raft of expansion initiatives, including the foray into the new Caribbean markets, with that hub possibly located in Jamaica - although Medera did not disclose whether Kingston or Montego Bay was being considered for that base.

The planned South America push is likely to be piloted from Georgetown, Guyana, one of CAL's most profitable destinations. There, the Cheddi Jagan International Airport is undergoing a US$150-million expansion and retrofitting, a project being handled by Chinese state enterprise China Harbour Engineering Company.

In 2019, the airline will be launching Caribbean Airlines Travel and Tours - a travel service and tours subsidiary aimed at tapping into the growing tourism travel market from which it is now virtually absent - and channelling those travellers on to its planes.

Caribbean Airlines also sees 2019 as a year of 'alliance building', which includes partnerships with other airlines for those passengers wanting to make connections to and from destinations that CAL itself does not serve - which is referred to in the airline industry as code-sharing.

Conventional wisdom is that when companies are faced with mounting losses over many years, they cut back to stem the haemorrhaging. On the surface, CAL appears to be doing just that, having retreated from some markets in keeping with the recommendations of a parliamentary committee of the Trinidad and Tobago government in 2017.

For example, come January, the airline will yank its Montego Bay to Fort Lauderdale flight, leaving just a daily flight from that tourism mecca into the John F. Kennedy airport in New York.

Even the latter route is challenged, leading to widespread speculation that it could be next on the chopping block, thereby resulting in CAL's full retreat from Montego Bay. That would result in loss of work for some 15 direct staff and scores of contractors employed in ticketing, security, baggage and cargo handling.

While conceding that the MBJ-JFK flight is "challenged", Medera was non-committal on the ultimate fate of the route and the Montego Bay station, but acknowledged that MoBay was important as a busy and growing gateway for leisure travellers - a group CAL is seeking to attract.

Quizzed about possible job cuts in the rightsizing, the CEO said that rather than presiding over job losses, he has grown staff by more than 100 in his 14 months at the helm, bringing the workforce across all CAL stations to 1,700.

CAL's expansion programme is grounded on the renewal of its fleet of 12 leased 737-800s next-generation jet planes, which, together with the five smaller ATR72-600 turboprop aircraft that it owns, service its 36 routes to 20 destinations.

The airline has signed an agreement to upgrade the dozen 15-year-old jets to Boeing's newer B737 MAX model, that is said to be more fuel-efficient. Delivery of the planes will start in the fourth quarter of 2019, with the changeout continuing over the next three years.

Medera explained that the arrangement is not for purchases immediately, but rather for the renewal of the leases. Airplane leasing companies, including current lessors and new entrants from China, are to submit bids in a transparent procurement process. The existing lessors are Aercap, ALAFCO, Air Lease Corporation, Apollo Aviation Group Macquarie AirFinance and Thunderbolt Aircraft Lease.

While the lease renewal will result in increased monthly payments to leasing companies for the newer models, the CAL CEO notes that the savings from fuel and maintenance will result in overall savings compared to current expenditure on those items. A long-term scenario of a mix of outright jet purchases and lease is the ideal arrangement that CAL is striving towards. But that won't come until the airline's profit-making becomes a habit. Medera reckons that three straight years of profits will herald sustainability.

As to the turnaround to black this year, a major technological overhaul is being credited with unleashing new earnings while helping to cull costs.

"We really moved away from spending lot of money on things that were not necessary," he said.

A new IT configuration for communication between stations, for example, saved the company US$1 million in 2018. The use of WhatsApp messaging and webchat for customers not only saved money, but also grew revenues.

Revenue growth has also come from new products, including Caribbean Plus, which offers more legroom at a price; and Caribbean Cafe, which sells Caribbean-made products in-flight. CAL also reintroduced car rentals and is offering hotel booking discount options as part of ticket sales.

The Trinidadian's visit to Jamaica this week came as the airline's 263 staff here have been anxious for answers about union representation and a pension plan, among other issues.

Medera said forward movement was expected on the matter of union representation this week and his head of human resources was to lead two days of meetings in Jamaica, ending today, that are meant to resolve the issue.

As to the pension plan, the carrier is awaiting approval for the scheme from pension regulator, the Financial Services Commission, which he also noted could come soon.

Despite the challenges of the last 14 months on the job, Medera says Caribbean Airlines has been his most rewarding career move to date.

Medera says his attraction to CAL lies in its possibility of using air transport to help Caribbean nationals realise there is more that unites than separates them. For him, Caribbean Airlines is a localised brand that is emblematic of what a truly united Caribbean could be in the future.