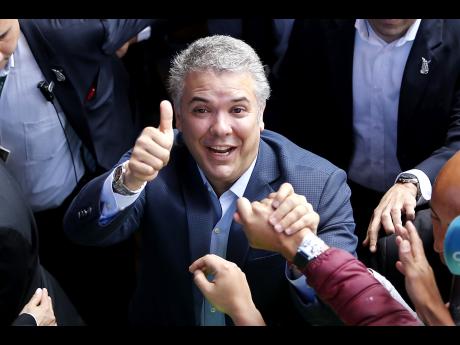 Despite having an economy that is growing at a moderate rate of three per cent year-on-year, booming oil prices and the victory of centre-right candidate President Ivan Duque, a sense of pessimism permeates the air.

Unlike neighbouring Panama and Peru, two countries that fret about the moderation in economic activity, Colombia's slowdown was not as significant. Moreover, the sense of malaise is not related to the more than two million Venezuelans who have crossed the border in search for a better life.

There is a kindred spirit between the two nations, and most Colombians recognise that Venezuela welcomed its Andean brethren when they were suffering their long episode of violence and unrest.

The dark mood is really pointed at the legacy left by former President Santos and the peace accord with the FARC. Most Colombians are wary that the deal was done in bad faith. Not only will it result in greater delinquency and a decline in security, as ex-guerrillas return to the life of crime they enjoyed in the jungle, most Colombians feel that it will result in the strengthening of the political left.

Furthermore, they dread the possibility that Petro, the impeached mayor of Bogota, will win the next presidential election. A former guerrilla fighter, he is thoroughly despised by most of the middle and upper classes in Colombia. As a result, many feel that it is only a matter of time until the country embarks on a Venezuelan-styled trajectory.

The geometric increase in cocaine cultivation is one of the factors fuelling the sense of anxiety. Claiming environmental concerns, President Santos stopped the aerial fumigation of cocaine fields and replaced it with hand eradication.

Colombia is a huge country with a rugged terrain; large swathes of the land mass are difficult to access. Therefore, this makes hand eradication very difficult - and dangerous. As a result, cocaine production has exploded. According to the United Nations Office on Drugs and Crime, Colombia's cocaine production surged 31 per cent year-on-year in 2017 to 1,400 tons, which was cultivated on 171,000 hectares. This marked an increase of 25,000 hectares of land under cocaine cultivation.

The local value, versus the street value, of the 2017 cocaine crop was US$2.7 billion. This is equivalent to eight per cent of Colombia's total exports of goods and services, and slightly more than its embarkations of coffee beans - the country's second-largest export product.

The problem is that this is accumulating an enormous war chest within criminal elements of the society. Criminal bands are on the rise, and dissident parts of the FARC have abandoned the peace process and returned to the jungle.

There is no doubt that some of these funds will be used for political campaigns. This is what is keeping so many Colombians awake at night. Given the enormous amount of money that is being generated by the cocaine industry, the FARC, with Petro as their candidate, could win the next presidential election, especially since President Iv·n Duque cannot be re-elected.

In the meantime, the new government faces several important challenges. The first is the weakness on the external front. Although Colombia's trade deficit narrowed 20 per cent during the past year, it still has a shortfall of US$4.1 billion. This is in spite of a 40 per cent devaluation of the currency and a doubling of oil prices.

Part of the reason for the shortfall is the persistent import of intermediate goods. The deindustrialisation of the Colombian economy, much of it due to the free trade agreement with the United States, left the country dependent on external sources for intermediate goods, such as petrochemicals, fertilisers and auto parts.

The problem is that an appreciation of the peso will exacerbate the shortfall. With oil prices in the US$80 range, the Colombian peso should be trading in the low 2,000s, instead of the low 3,000s. The only reason it is here is because of the rise in US interest rates. Nevertheless, an eventual easing of US monetary policy will probably result in a rapid appreciation of the peso.

The Colombian government needs to foster more foreign direct investment to reindustrialise the economy and bolster the export sector. A central government fiscal deficit of four per cent of GDP is another major concern. Earlier this month, the congress passed another fiscal reform to widen the VAT tax base, raise personal tax rates, mandate prison sentences to tax evaders and ease corporate taxes. The measures are expected to generate US$14 billion pesos in additional revenues.

All of these measures will help keep the economy on an even keel.

There are good reasons for Colombians to be worried about the political situation, but things are not so bad on the economic side of the picture.