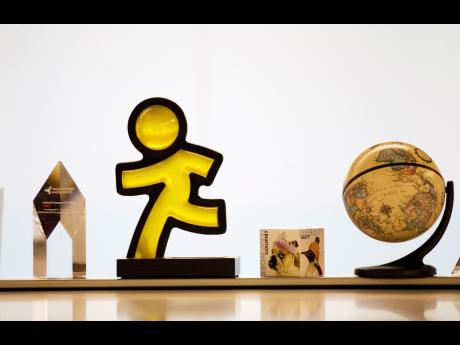 AP
This May 12, 2008 file photo shows the AOL Running Man logo and other decorations at AOL's New York offices. Verizon will write down half the value of its AOL and Yahoo businesses in its 2018 fourth quarter.

The wireless company spent more than US$4 billion to buy AOL and nearly US$5 billion to buy Yahoo as part of an effort to compete with Facebook and Google in a growing market for digital advertising. Now, Verizon is slicing the value of those two businesses in half, taking a US$4.6-billion accounting write-down in the fourth quarter.

The company blamed weak revenue and earnings from the two businesses, known jointly as Oath, and said the benefits from integrating Yahoo and AOL were less than expected.

The write-down "puts a period at the end of a short and inconsequential sentence," said Craig Moffett, an analyst at MoffettNathanson.

"They tried to create an alternative revenue stream for wireless, but they have ultimately found it too hard to make advertising into what they had originally hoped," he said. "The best one can say is that it was a relatively modest investment for a company of Verizon's size."

In recent years, telecoms companies have been acquiring producers of entertainment, news and other content to compete with tech giants such as Amazon, Google and Facebook. The biggest example is AT&T acquiring Time Warner earlier this year for US$81 billion. Telecoms companies are looking for alternate sources of revenue to grow in a world where most Americans already have cell phones.

"They hope to succeed at a time when Verizon has already admitted failure," he said. "And AT&T's bet was many, many times larger."

Verizon was ahead of the curve when it bought AOL in 2015 and Yahoo two years later. Even at the time, the two legacy Internet companies were past their late 1990s prime. And while the Yahoo price was already lowered to reflect a pair of massive security breaches at the company, many analysts thought US$5 billion was a lot of money to pay.

Yet, Verizon took a bet, it could revitalise the properties. The goal was to attract lucrative digital advertising dollars as more ad revenue shifts online.

Those dollars have not materialised as users, and by extension ad dollars, stuck with giants like Facebook and Google instead of turning to Oath properties for online content.

Oath CEO Tim Armstrong stepped down in September, though he will continue as a strategic adviser there until the end of the year.

Separately this week, Verizon said that 10,400 US managers have accepted voluntary buyout offers. It will take a charge of US$1.8 billion to US$2.1 billion in the fourth quarter related to the buyouts, according to a regulatory filing late Tuesday.

The New York company is making US$10 billion in cost cuts, money that will be used to ramp up investments in 5G, the next-generation network that telecoms are pouring billions of dollars into to develop for home broadband service and other faster tasks.

Verizon is undergoing a significant restructuring under new CEO Hans Vestberg. The company said last month that it will be organised into four groups at the start of the year: consumer, business, media, and global network & technology.