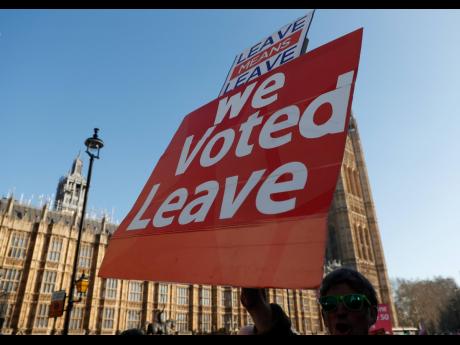 AP
A supporter of leaving the European Union holds up a placard as he take part in a demonstration outside the Palace of Westminster in London, Wednesday, February 27, 2019.

The United Kingdom struck a trade deal on Wednesday for a post-Brexit world, obtaining approval from other World Trade Organization (WTO) members to stay part of a competitive market for lucrative government contracts after the country leaves the European Union.

The agreement allows Britain to retain its place among the 47 WTO countries that are involved in the Government Procurement Agreement. The EU’s 28 member nations belong as a single entity, so the bidding agreement’s participating countries signed off on allowing Britain to join as an independent party to the pact.

A Geneva-based trade official said on condition of anonymity because he’s not authorised to be named publicly that the agreement was a relatively straightforward step but an important one in ensuring access to a combined market valued at over US$1.7 trillion. Britain still faces unresolved issues when it comes to access for its goods and services markets after its planned exit from the European Union on March 29.

The deal comes a day after some countries, led by New Zealand, aired complaints about how tariff-rate quotas will be set by Britain and the European Union if they don’t reach a Brexit deal by the planned departure date.

Under the WTO’s tariff-rate quota system, agricultural products that are imported under a set quota receive lower duty rates.

Some trading want the European Union to maintain its current quotas, and hope that Britain will establish its own quotas – in essence expanding the total market.

The EU and Britain plan to split those quotas up based on Britain’s past share of overall EU imports, the official said.