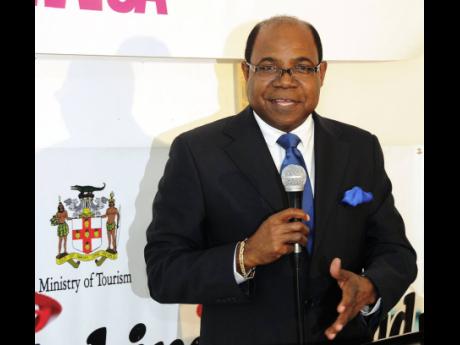 Minister of Tourism Edmund Bartlett said on Thursday that he would be engaging in a series of meetings with local bankers hoping to convince them to extend credit to entrepreneurs in the tourism industry.

Bartlett, while reviewing the tourism sector’s mid-season performance, said that while the industry had numerous local suppliers, they were mostly tradesmen who, in fact, imported the goods supplied from abroad.

Opportunities existed, he said, in the manufacture of uniforms for hotel staff and bedding, such as sheets and pillows. In agro-processing, entrepreneurs could produce tomato paste, juices, jams, pepper mash and other foods and condiments used in the industry, he said.

Bartlett insists that tourism-related business was highly bankable activity, given the size of the sector and its continued growth. Tourism contributed 22 per cent to GDP in 2017, and the minister says he expects the 2018 data, which are yet available to reflect an higher ratio.

Bartlett was euphoric over numbers for the current winter season which shows 900,000 stopover visitors from January 1 to February 27. The numbers exclude cruise visitors which he said would increase the impact. Stopover numbers to date, he said, are up 14 per cent year over year.

The tourism minister also reported at a media briefing that employment in the sector grew by 19,000 jobs in 2018, pushing direct employment to 120,000, excluding attractions and cruise lines.

Jamaica, Bartlett projected, was on track to exceed last year’s performance when tourist visits totalled 4.13 million and spending was estimated at US$3.3 billion.

For the current season, Bartlett said arrivals were up in all categories, but mostly from North America. Other segments that saw an increase were Latin America, Europe, Caribbean visitors and the Jamaican diaspora.

The average spend per room was at a five-year high, Bartlett added, while noting that room rates of US$500 to US$800 per night were currently the norm.

But the tourism minister also insisted that the sector could be adding even more value to the economy with investment support.

“Bankers are being challenged to understand that the place to look for investment is tourism,” he said.

The tourism ministry itself transferred capital from the Tourism Enhancement Fund to EXIM Bank to lend entrepreneurs at 4.5 per cent. Another $100 million, he noted, would be added to an existing credit line of $100 million for the transport sector, where members might need to refresh vehicles for aesthetic and security reasons.

With regard to hotel construction, Bartlett noted that the origin of capital had changed, with hotels no longer being built by families, but by money sourced on the stock exchanges of international markets.

The minister disclosed that just last week he had been asked to review two new plans for hotels, one for downtown Kingston and another for Freeport in Montego Bay.