DBJ: Structure of JPS share listing still to be determined 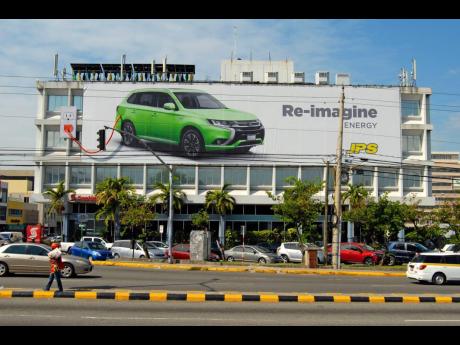 The JPS headquarters in New Kingston is bedecked with a banner advertising the power utility&apos;s Re-imagine campaign, as seen in 2016.

The listing of government-owned Wigton Windfarm is targeted for next month, and the Development Bank of Jamaica (DBJ), is already weighing the next state assets targeted for divestment via the stock market, which includes the holdings in Jamaica Public Service Company Limited, JPS. But the Government of Jamaica (GOJ) is yet to settle on how exactly it will make its 19.9 per cent shareholding in the monopoly power distributor available to the public.

“The GOJ is now commencing the preliminary analysis and assessment to determine the modality and transaction structure that will best achieve the GOJ’s objectives for the privatisation of its shares in JPS,” said the DBJ, the divestment agent for the Jamaican Government.

“This will necessarily include preliminary discussions with the majority shareholders in JPS. regarding the transaction,” said the state-owned bank in prepared responses to a Financial Gleaner query about the precise modality by which GOJ intends to offload the shares.

The Government’s JPS shareholding is held jointly by the Account General’s Department and DBJ.

Under local stock market rules, at least 20 per cent of a company has to be floated on the Jamaica Stock Exchange to qualify for a listing. The Jamaican Government’s holdings in JPS fall just below that threshold, and, in any event, any direct listing of the shares would have to involve the primary owners of JPS.

The Jamaican Government could otherwise create a corporate vehicle to hold its JPS shares and list that entity, which would give subscribers to that IPO indirect ownership of a piece of the power utility.

Jamaica initially owned JPS but sold controlling interest in the power company in 2001 for US$201 million.

With the utility’s net book value now at US$440 million, based on its yearend accounts for 2018, GOJ’s shareholding represents US$87 million of that, or more than $11 billion in local currency .

The rest is split among Japanese company Marubeni Corporation, 40 per cent; Korea East-West Power Company of South Korea, 40 per cent; and various other investors, 0.1 per cent. Both Marubeni and East-West have their JPS shares vested in holding companies incorporated in Barbados – MaruEnergy JPSCO 1 SRL and EWP (Barbados) 1 SRL.

“Once the Government has completed its assessment and Cabinet approval is received to advance the process, discussions will commence formally with all relevant stakeholders integral to successfully implementing the approved strategy,” the DBJ said.

It restated that the Government is considering several assets for possible listing and that each would have to be assessed for readiness and suitability for the market, followed by a recommendation on the specific structure of the IPOs for Cabinet’s consideration and approval.

Wigton Windfarm Limited – a renewable-energy company that is owned outright by the Jamaican Government through Petroleum Corporation of Jamaica – went through that process, and now, DBJ says the prospectus is being finalised to launch the IPO and achieve listing by April.

As a precursor to listing, last December, the Government refinanced US$49.23 million of the debt owed by Wigton to the PetroCaribe Development Fund, PDF, which has been the wind farm’s major debt and equity investor.

Figures provided by the PDF last June showed total loans of US$99.3 million to Wigton from the fund.

The PDF was set up as a public body corporate in 2006 to receive concessionary financing for the purchase of Venezuelan oil and manage Jamaica’s loans to that country but is now being wound up by the Government after paying back the oil debt.