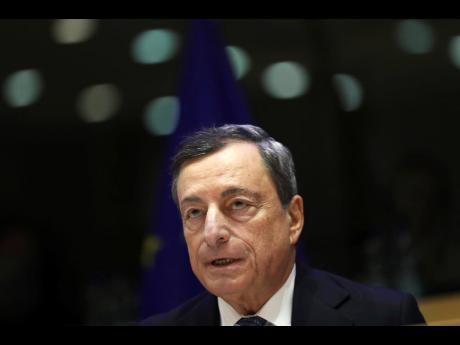 The central bank for the 19 countries that use the euro pushed back the earliest date for an increase in interest rates from current record lows. It said rates would stay unchanged at least until year end – previously, it had said until the fall.

The ECB also said it would offer a series of ultra-cheap loans to banks, supporting their ability to keep lending to businesses.

The moves appear to signal concern that the weakness in economic growth could be more than a blip and threatens to turn into a more lasting downturn.

A trade war between the US and China, the world’s largest economies, has hurt international commerce and manufacturing. Britain’s exit from the European Union could further damage business activity. US President Donald Trump, meanwhile, has threatened to put tariffs on auto imports that would hit European automakers hard.

Amid doubts about the extent of the economy’s slowdown, President Mario Draghi said, it was important to take action.

“In a dark room you move with tiny steps. You don’t run, but you do move,” he told a news conference at the bank’s headquarters in Frankfurt. “You try to be proactive rather than reactive.”

Wage growth continues to support consumer spending and the economy. But the Eurozone, where the economy is heavily dependent on trade, faces external threats such as a chaotic Brexit and the possibility that governments around the world might put more limits in trade.

“Our decisions certainly increase the resilience of the Eurozone economy,” Draghi said, “but can they address the factors that are weighing on the economy in the rest of the word? They cannot.”

The US Federal Reserve has already adjusted the course of its monetary policy. It has signalled a pause in its rate increases and said it’s ready to slow the reduction of bond holdings purchased under earlier stimulus efforts.

Chinese authorities, faced with a long-running cool-off in the country’s high growth, are also offering support to business, including a cut of up to 1.3 trillion yuan (US$200 billion) in value-added and other taxes.

“It is clearly an attempt to stay ahead of the curve,” he said.

Investors initially reacted with euphoria to the bank’s actions, but then sold off stocks as they seemed to focus on the longer-term prospect of weaker growth.

The ECB’s actions highlight how quickly the fortunes of the European and global economy have shifted. The bank on Thursday slashed its forecast for Eurozone economic growth this year to 1.1 per cent from 1.7 per cent previously. Inflation is expected at 1.2 per cent, down from a 1.6 per cent forecast earlier and well below the bank’s goal of just under two per cent.

Only in December, the ECB was confident enough to end almost four years of stimulus through monthly bond purchases amounting to €2.6 trillion. The purchases were a way of pushing newly created money into the economy to raise inflation from dangerously weak levels, and support a recovery from the Great Recession and a crisis over too much debt in the Eurozone.

Yet, even as the bank was bringing that stimulus effort to an end, economic signals began to weaken. The Eurozone economy grew 0.2 per cent in the fourth quarter of last year, down from 0.4 percent in the first two quarters.

Which means that it could be some time before the ECB raises its key interest rates. The rate for lending to banks is at zero, while the rate on deposits from commercial banks is at minus 0.4 per cent.