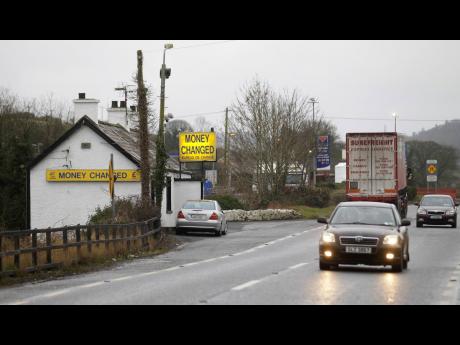 The Associated Press
In this file photo dated January 30, 2017, a bureau de change on the border between the Irish Republic and Northern Ireland, near the town of Jonesborough, Northern Ireland.

The issue of a possible physical border between the United Kingdom’s Northern Ireland and the Republic of Ireland, an EU state, received scant attention during the 2016 Brexit referendum. But it has proven to be a major stumbling block in the British government’s quest for a divorce deal.

The border has been open and unguarded for 20 years since the Good Friday agreement ended the armed conflict in Northern Ireland, but that status will be much more difficult to maintain once Britain is no longer part of the EU. A host of new trade rules and tariffs are likely to apply, along with possible vehicle checks.

That could mean a “hard border” is put in place, potentially reigniting old passions and leading to sporadic violence.

The so-called backstop that is part of the UK’s withdrawal agreement from the EU is an insurance policy designed to ensure there is no hard border – no customs checks or other border structures – after Britain breaks away. It says if no other solution is found, Britain will remain in a customs union with the EU in order to keep the Irish border open.

Brexit supporters fear that the backstop could last indefinitely, tying Britain to the EU even after it has formally left the bloc – in effect, defeating one of the main purposes of leaving in the first place.

One possible solution would be for Northern Ireland to remain in a customs union with the EU while Britain departs, but British leaders have categorically ruled this out because it would in effect place a border in the Irish Sea between Northern Ireland and the British mainland.

Some officials believe a technological solution may eventually make physical border checks unnecessary, but for now the backstop remains a considerable obstacle to a divorce deal.