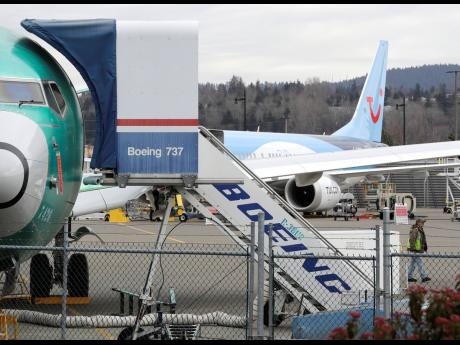 The Associated Press
In this photo taken on Monday, March 11, 2019, a Boeing 737 MAX 8 airplane being built for TUI Group sits parked in the background at right at Boeing Company’s Renton assembly plant in Renton, Washington.

Airline pilots on at least two United States flights have reported that an automated system seemed to cause their Boeing 737 Max planes to tilt down suddenly.

The pilots said that soon after engaging the autopilot on Boeing 737 Max 8 planes, the nose tilted down sharply. In both cases, they recovered quickly after disconnecting the autopilot.

As described by the pilots, however, the problem did not appear related to a new automated anti-stall system that is suspected of contributing to a deadly October crash in Indonesia.

The Max 8 is at the centre of a growing global ban by more than 40 countries following a second fatal crash, this time in Ethiopia, in less than five months. The US announced Wednesday it would ground all Boeing 737 Max 8 and Max 9 aircraft immediately.

American Airlines and Southwest Airlines operate the 737 Max 8, and United Airlines flies a slightly larger version, the Max 9. All three carriers vouched for the safety of Max aircraft on Wednesday.

The pilot reports were filed last year in a data base compiled by NASA. They are voluntary safety reports and do not publicly reveal the names of pilots, the airlines or the location of the incidents.

It was unclear whether the accounts led to any actions by the FAA or the pilots’ airlines.

In one report, an airline captain said that immediately after putting the plane on autopilot, the co-pilot called out “Descending”, followed by an audio cockpit warning, “Don’t sink, don’t sink!”

The captain immediately disconnected the autopilot and resumed climbing.

“With the concerns with the MAX 8 nose down stuff, we both thought it appropriate to bring it to your attention,” the captain wrote. “Best guess from me is airspeed fluctuation” due to a brief weather system overwhelming the plane’s automation.

The pilots talked it over later, “but can’t think of any reason the aircraft would pitch nose down so aggressively,” the co-pilot recounted.

Preliminary information released by Indonesian investigators suggests they are looking at the possible role of the Max’s new automated anti-stall technology as a factor in a Lion Air crash in October shortly after take-off from Jakarta. Data indicate that the pilots struggled with repeated nose-down commands from the plane before it crashed into the Java Sea and killed 189 people.