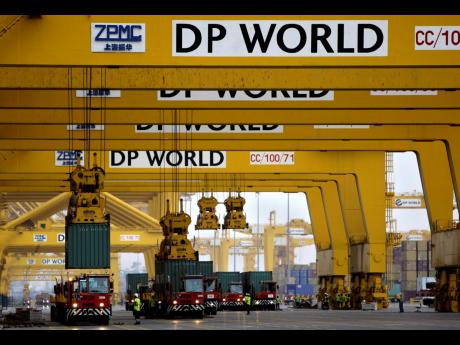 The Associated Press
In this Feb. 8, 2009 file photo, cranes off load containers at the Jebel Ali Port Terminal 2 in Dubai, United Arab Emirates. Global port operator DP World said Thursday its profit rose 10 per cent in 2018, overcoming worldwide tensions over trade amid a trade war between China and the U.S. and fears about Britain leaving the European Union. (AP File Photo)

Global port operator DP World said Thursday its profit rose 10 per cent to US$1.29 billion last year despite worldwide trade tensions, buoying a firm that may try again to enter the United States market after a failed attempt a decade ago became a political maelstrom.

DP World Group Chairman and CEO Sultan Ahmed bin Sulayem told The Associated Press that the US under President Donald Trump was “open for investment”. He declined, however, to offer any specifics of what ventures his government-backed firm would pursue.

“I think DP World is different than DP World what was, because we were just starting and nobody knew us, and now they know us,” he said. “What stops us from going to America is really finding good opportunity. If we find a good opportunity, we will go.”

DP World reported revenue for last year of US$5.6 billion, up from US$4.7 billion the year prior. That’s an increase of 19.8 per cent for the port operator.

It attributed its revenue growth to acquisitions like the Dubai-based businesses Drydocks World and the Dubai Maritime City zone near the Dubai Creek. It said it plans capital expenditures of up to US$1.4 billion in 2019, with investments planned in the Emirates, Ecuador, Egypt, Senegal and Somaliland.

DP World, the world’s fourth-largest port operator, runs operations across the world from as far east as Brisbane, Australia, to as far west as Prince Rupert, Canada.

Sulayem dismissed any concerns that Trump’s protectionist policies could hurt DP World, which is backed by Dubai’s government. However, their effort to enter the US and run major ports there in 2006 drew criticism over security concerns about a foreign government having control of American ports.

DP World also has expanded aggressively into East Africa, where the Emirati government has begun building military bases. That’s had its problems, such as in February 2018, when Djibouti seized control of its terminal there.

This February, Al-Shabab militants shot and killed a Maltese man working for DP World in Somalia, saying the UAE firm “occupies” the area.

Sulayem said DP World remains “very concerned about the safety of our people” and works to ensure their security.

“Unfortunately, what happened in Puntland is terrorism,” he said. “There’s something that we are very concerned about, and we are taking measures to make sure that nothing happens to our people.”