JPS raises US$180m to refinance half its debt 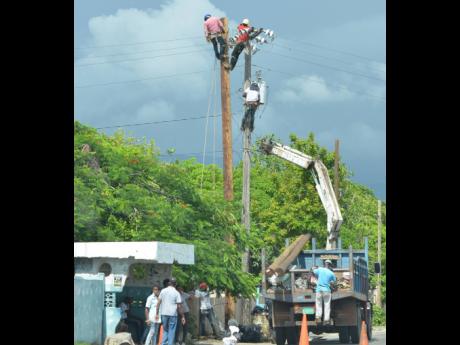 File
This October 2018 file photo shows a JPS crew at work along the Mandela Highway in Kingston. The power utility has raised funds to refinance about $22 billion of long-term debt.

Power utility Jamaica Public Service Company, JPS, refinanced US$180 million in debt or roughly half of its borrowings, arising from a deal brokered by Sagicor Investments in February.

Nearly two-thirds of the funding, which converts to more than $22 billion in local currency, was in the form of Jamaican currency and US dollar-denominated bonds, while US$66 million was in the form of syndicated loans raised through the brokerage’s sister company, Sagicor Bank Jamaica.

The debt offering was taken up by local banks, institutional investors and retail clients.

The bonds are priced at 7.35 per cent and 8.4 per cent, and will refinance part of the utility company’s existing debt, which it was servicing at 11 per cent.

JPS said the savings would amount to US$5.7 million annually, which is roughly equivalent to three months of profit for the power utility.

“This was the ideal time for JPS to refinance, taking into consideration Jamaica’s improving economic conditions, “ said Mischa McLeod-Hines, assistant vice-president in charge of capital markets at Sagicor Investments Jamaica Limited, in a release issued by the brokerage.

“It also was an opportunity for local investors to participate in an occurrence which was once the domain of international financiers,” she said.

JPS earned US$28.7 million net profit on revenues of US$908 million for year ending December 2018, up from US$24.2 million of net profit recorded the previous year.

The utility holds US$346 million in long-term loans, up from US$317.7 million a year earlier, due to new debt financing for its ongoing construction of a power plant in Old Harbour, St Catherine. The 190-megawatt power plant, due for commissioning shortly, will operate on natural gas rather than the relatively expensive diesel, as part of the country’s fuel diversification programme. JPS is the operator of Jamaica’s national electrical grid.

“The improved technology will lower generation costs, as well as Jamaica’s exposure to the volatility of world oil prices,” said JPS Chief Financial Officer Vernon Douglas in the release issued by Sagicor Investments.

“The natural gas plant will replace some of the generating units that operate on heavy fuel oil, resulting in much cleaner and more environmentally-friendly energy,” he said.

JPS is primarily foreign owned by Marubeni Corporation of Japan and Korea Electric Power Corporation, based in South Korea. Douglas made a point of touting the fact that the Jamaican utility had chosen a local institution for the transaction.