Pulse doubles down on leisure - And new investor Bogdanovich loves it 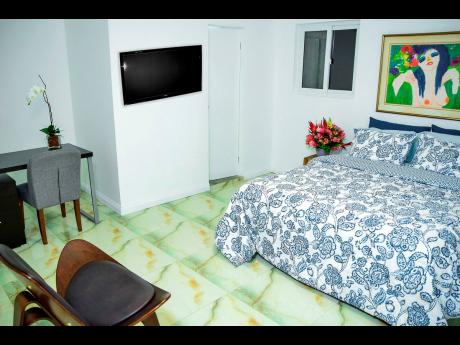 With the commissioning of a 22-room boutique on the cusp of New Kingston and pending rollout of new suites at Villa Ronai, Pulse is looking to carve out more earnings for the leisure side of the company that is better known for models and fashion.

“We anticipate that using a room rate of US$100 per night with nominal room occupancy of, say, 70 per cent, our estimate is that we will be bringing in an additional J$70 million in revenue,” says Pulse Investments chairman Kingsley Cooper, who says that for now, the rooms at Pulse Centre in Kingston are fully booked.

He says that when fully functional, the villas being rolled out at Villa Ronai would push earnings for the hospitality segment to around $300 million.

“That’s an important plank of Pulse’s strategy going forward because we want to use the real estate in the most productive way, making it the backbone of the creative business. The way I see it is if you are generating pure cash in that way, then it sets the stage for involvement in the creative projects,” he told the Financial Gleaner.

The rooms at Pulse Centre on Trafalgar Road are a stone’s throw away from the new R Hotel at Renfrew Road. The latter property is, effectively, competition for Pulse, but the two operations also share a connection through Joe Bogdanovich, who is a backer of the R Hotel and a shareholder in Pulse Investments Limited.

Back in mid-2017, Bogdanovich rocketed to the Top 10 list of owners of the Pulse stock, then upsized his holdings by close to three-quarters of a million more shares last year to 9.536 million shares. That still represents just a sliver of the modelling and hospitality company, at 0.58 per cent.

“I think it’s a fantastic company, and the management really has its eye on the ball to really increase earnings significantly. I’m looking at their real estate holding and I guess they’re going into Airbnb,” said Bogdanovich in an interview with the Financial Gleaner about his interest in Pulse. His other interests include Downsound Records and the annual reggaes music festival Sumfest.

Bogdanovich sees Airbnb rentals as a sustainable source of business.

As for Pulse’s longevity, Bogdanovich says that he has confidence in the father-daughter leadership duo, Chairman Kingsley and CEO Safia Cooper.

“He has excellent staff and I think that Safia is doing very well. Overall, I like the way they do business,” he said.

By early summer, Pulse expects to roll out 25 new suites at its upmarket Villa Ronai property in St Andrew but is looking to a time horizon of 18 months to complete the larger project.

The hospitality offerings at both properties are being promoted via a new website set up by Pulse – pulseleisurejamaica.com.

“We have 22 rooms at Trafalgar Road, and the plan is for 68 suites at Villa Ronai. The first phase of that will see 25 suites set for completion by July 2019,” Cooper said, referring to the Ronai suites.

Bogdanovich says that the decision to offer accommodation at the Pulse Centre complex was a good move by the Coopers. The complex otherwise houses various shops as well as the Peter Tosh museum.

“I think that it looks very good. They have done wonders with the design. It looks fashionable and attractive. In fact, if I were someone coming to Jamaica to hang out or chill, so to speak, then having the Pulse models there and the bar along with the rest of the facilities, like the boutiques – at the price they are offering – I think that it’s very hard to beat,” he said.

“Mr Cooper really has his mind on expanding his holdings in a very astute way. I think he is doing a very terrific job, and he has big plans for the regional exploitation of the modelling agency and plans to expand across the world into even Africa. That means he will be covering black people all over the world, and I think it’s a fantastic thing that he is doing,” he added.

Cooper confirmed that Pulse would be expanding its horizons, and that a big announcement was set for April 9 but had no comment on the details.

“In another month, we will be announcing a creative initiative that will involve the Caribbean, Europe, and North America,” he said.