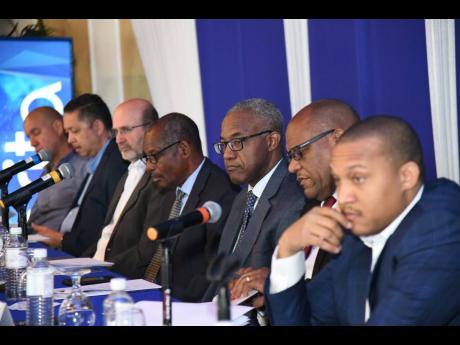 Barita Investments Limited will enter the investment banking market, a move meant to shore up revenues that are pressured by falling ­interest rates.

“It is a new line of fee income business that is not traditional at Barita. We want to bring that to the company to bolster revenues,” said Deputy Chairman Paul Simpson and co-founder of Cornerstone Investments, the private equity firm that took over Barita last year.

Cornerstone Investments is seeded by a group of high net worth individuals, including Mark Myers of Restaurants of Jamaica, the franchise holder of KFC, who is also Barita’s new chairman.

Part of the move involves the company building up its cash resources. Barita is currently raising some $4 billion in cash from its rights issue of 10 additional shares to every 17 held by shareholders. At the company’s annual general meeting on Thursday, shareholders approved resolutions to increase the authorized shares tenfold from 1.5 billion units to 15 billion units.

“We are very positive on the take up of the rights issue,” said Simpson.

Since the Cornerstone takeover, Barita’s stock price has quadrupled in value. Cornerstone acquired majority stake in Barita last September at $9.20 per share, and the stock has been trading at an average of $50 since the start of the year.

The bulk of the shareholding was acquired from founder and former chairman Rita Humphries-Lewin, who formed the company over 40 years ago. She was unavoidably absent at the annual general meeting, according to chairman Myers.

Barita made net profit of $363 million for its full year ending September 2018, up 79 per cent, a performance mainly due to the tripling of gains on foreign exchange and the growth by half on interest income. Profit spiked dispute a dip in revenue from $1.96 billion to $1.9 billion.

“We need enter new revenue streams. Part of that involves us looking at forays into investment banking to give us greater access to the capital markets,” said Managing Director Ian McNaughton, “Another aspect involves finding the right opportunities to get the deals done.”

Barita paid out $311.7 million or 70 cents per share over the year ending September 2018, more than sixfold the payout of $48.6 million a year earlier. The company said going forward its new dividend policy would see Barita distributing about 80 per cent of profit to shareholders annually. Checks indicate that past dividend payments have been with a range of about 15-20 per cent.

McNaughton added that 80 per cent “is a minimum” target but that the company would not go above 100 per cent of its profits.