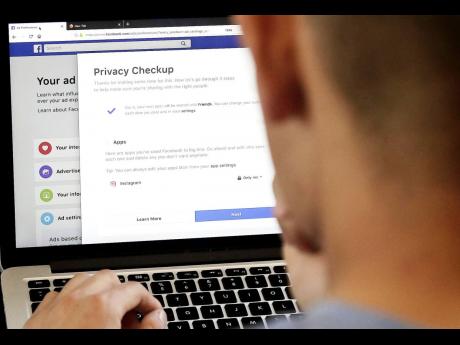 AP
In this March 26, 2018 photo, a man poses for photos in front of a computer showing Facebook ad preferences pages in San Francisco.

Regional head of the Inter-American Development Bank, IDB, in charge of Latin America and the Caribbean Therese Turner-Jones, is holding up the European country of Estonia as a model for Jamaica, insisting that greater investment in technology and the pursuit of a fully digital society can be catalysts for the economic and social development this country seeks.

This year, the IDB marks 60 years of existence and 50 years of development financing in Jamaica, and Turner-Jones grades the country’s development a C-plus over the period.

Noting that on a technical macroeconomic level, Jamaica is at the best place it has been in decades, she pointed out that such a grade speaks to what remains to be done. In an interview with the Financial Gleaner, the IDB regional head recommended bigger investments in technology to produce a quantum leap forward for the country.

More of such investments, she noted, are being made through the IDB Lab, the experimental, innovative part of the bank that is geared towards stimulating small and medium enterprises. “A lot of the attention of the Lab is going to be on technological innovation in some niche areas, including applications of blockchain technology,” Turner-Jones pointed out.

She explained: “Think about the future of Jamaica as a digital economy, which is something the bank is working on very hard with this administration. Think about how much more efficient Jamaican businesses can be and the average citizen’s life can be if you don’t have to traipse from one agency to another with a piece of paper to get it stamped. It’s not the way of the modern world.”

She noted that the Caribbean Examinations Council has started issuing blockchain certificates on which additional qualifications can be digitally layered. The bank is also working with the government of The Bahamas to roll out blockchain certificates for post-high-school ­training and for land titling. The technology is also being recommended to enhance traceability for food and agricultural production. Climate-smart agriculture and the development of disease-resistant crops are other areas in which Jamaica can benefit from technology investments, she says.

Calculating from the available data that almost a third of Jamaica’s population is either living below the poverty line or classified as ‘working poor’, Turner-Jones opined that the work has not yet really started to lift those people out of poverty. She recommended big technology investments for education in poor urban and rural areas as one way of achieving this.

“Jamaica’s future rests with young people, and young people who are able to cope with the world of the future, which is demanding more and more skills,” the IDB regional head said. “If children can’t understand math and are not literate, they are going to have a hard time coping in the world of the future. If they are not computer-literate and data-literate, it is going to become even more complicated to cope, because more and more jobs are moving in that direction,” she added.

Turner-Jones recommended the distribution of teaching materials and educational information from Jamaica’s top schools to those that are underperforming through technology links.

“Every Jamaican person, I don’t care where they are, even the most deep-rural town where there is just one basic school with 50 children with one computer, those kids ought to have access to the same quality of information and education as someone going to Campion, Jamaica College or AISK (the American International School of Kingston). All of this can now be done on a digital platform. You don’t even physically need to have teachers in some places,” she said.

She urged Jamaicans to demand that their Government, no matter which political party forms the administration, bring the country into the modern era. “The technology exists. It’s not expensive. It democratises education. It democratises access to finance. And you can have exponential change in growth if this existed,” she declares.

The IDB official notes that one of the interesting things about living today, as opposed to 20, 30 or 50 years ago, is how fast technology is allowing countries that are developing to leapfrog the development curve. In this regard, she pointed to Estonia, which, with its population of 1.3 million, has increased its gross domestic product per capita 15 times, from US$2,000 to US$20,000 in less than 30 years, or since 1991.

Estonia is an almost entirely digital society where all government services are accessed online, and databases shared between government and private enterprises allow for planning in areas such as education and healthcare. In that country, too, Wi-Fi access is considered a fundamental right and is one of the values on which the society is based, the others being mothers, bread and forests.

Adds Turner-Jones: “Lots of people [there] have PhDs in STEM (science, technology, engineering and mathematics) subjects ... . Their society runs on a digital platform, starting with a digital ID, which means that every interaction you have with the government is through a tablet, cell phone or a laptop. It’s not physically going anywhere. Imagine the people in Trelawny or Black River ... having access to a kiosk where they can email, ‘Please send me my passport’, and you send the money over the Internet.”

Getting there, she admitted, will require a change of mindset and the creation of an appetite for technology on the part of the Jamaican people and Government.