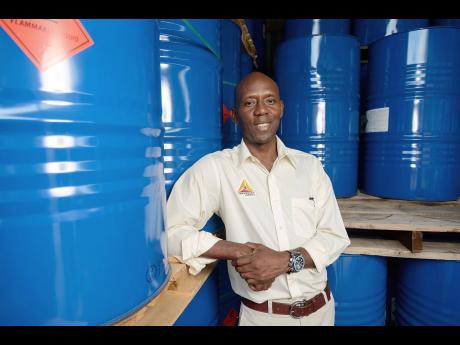 Junior market listed company Paramount Trading is seeking to raise $300 million in a new issue of preference shares as it moves to put the finishing touches on an expansion programme which will put the company in a position to offer new products and services and boost its revenue intake. The company has invited subscriptions for 150 million 8.75 per cent fixed rate preference shares due in 2021.

Chief Executive Officer Hugh Graham says the company has been relying on its own cash flow to fund its expansion programme over the last two years, and the new issue will take them across the finish line.

“This rights issue will put us in a better place going forward. In terms of advice from the board and others we had the ability to take the project to where we are now, and now it’s a question of putting on the finishing touches in such a way that we avoid the risk of putting any strain on the company’s cash flow,” Graham told the Financial Gleaner.

Lead broker for the offer is Mayberry Investments Limited. The shares will be sold at $2 each, according to the prospectus accompanying the offer. The $300 million being sought should go to Paramount less brokerage, legal fees and other fees and expenses not expected to exceed $16.5 million. Graham says Paramount had held back on approaching the market because it wanted to make a more compelling case.

“The fact is that I think we’ve done enough to show to our shareholders that we’re managing efficiently and that we have done a build-out involving considerable investment. We now have a good case in approaching the market,” he said.

The 8.75 per cent interest rate comes at a time when rates are trending downwards, and according to Graham, based on the market research from advisers and the timing it is coincidental that there has been a further dip in interest rates.

“The truth is that we’ve been working on this for quite some time and the process involved several layers of approvals, and if it were something that we were going to start today then the outcome might have been different,” said Graham.

“This rights issue offers a reasonable rate of return for our investors. Going the loan route would have been way more expensive plus all the implications that would have come with borrowing” said Graham, in response to Financial Gleaner queries as to why it chose to issue preference shares as opposed to taking a loan or issuing a bond at possibly lower rates.

Paramount says it intends to use the proceeds to take advantage of opportunities for improvement and expansion of the business, to provide working capital and for general corporate purposes and to pay the expenses of the invitation. Graham says the final touches to the company’s oil blending plant, the beach manufacturing operation and the continued upgrade of its software infrastructure are on the cards.

“We’re on the tail end of the software upgrade programme. We’ve actually implemented the backbone. It is a specific programme that helps with the manufacturing of chemicals,” the CEO said, noting that other components will be installed to optimise inventory management.

He says that when the improvements are done the company will be looking to optimise revenue garnered from the overall development programme.

“I think it is all we need at this point, but with the entrepreneurial spirit that we have here at Paramount there is no denying that we are looking at other things that can push our company. The fact is, for each new venture that we embark on something else always turns up,” Graham said, hinting that he may be booking to establish a packaging business.

“The fact is that if we look in that direction then we will, as a company, take greater control of our destiny in being able to match the quality of packaging with the high quality of the goods that we manufacture,” he said.

Paramount Trading operates from six premises at East Bell Road, Waltham Park Road and Spanish Town Road, all in St. Andrew. Graham says the company is aware that operating from so many locations could pose a problem in the long run and will have to look at consolidation at some point.

“That would have to be the next move because if we run out of space we will have to look for more. At the same time running six locations and looking to add a seventh (we) would have to take into consideration ballooning administrative costs, and that can come from security, duplication of services and so on,” he said.

“I believe that we’re in a very strong position, and with where we are it gives us some opportunities to maximise efficiency and consolidate some elements for further efficiency. The next two years will be very interesting years,” Graham said.