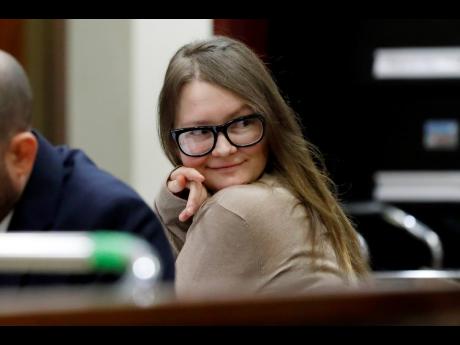 AP
Anna Sorokin sits at the defense table in New York State Supreme Court, in New York, Wednesday, March 27, 2019. Sorokin, who claimed to be a German heiress, is on trial on grand larceny and theft of services charges.

Anna Sorokin travelled in celebrity circles and tossed $100 tips – all the more reason to believe she was the German heiress she said she was. But behind the jet-set lifestyle and pricey threads, prosecutors have said, was a fraudster who bilked friends, banks, and hotels for a taste of the high life.

Sorokin, 28, lived in luxury New York City hotel rooms she couldn’t afford, promised a friend an all-expenses-paid trip to Morocco and then stuck her with the $62,000 bill, and peddled bogus bank statements in a quest for a $22-million loan, the Manhattan District Attorney’s office has alleged.

On Wednesday, the one-time darling of the Big Apple social scene went on trial on grand larceny and theft of service charges, alleging she swindled various people and businesses out of $275,000 in a 10-month odyssey that saw her jetting to the Midwest and Marrakesh, before landing in a cell at Rikers Island.

“Her overall scheme has been to claim to be a wealthy German heiress with approximately $60 million in funds being held abroad,” prosecutor Catherine McCaw said after Sorokin’s October 2017 arrest. “She’s born in Russia and has not a cent to her name as far as we can determine.”

Sorokin’s attorney said she never intended to commit a crime.

Lawyer Todd Spodek told jurors in an opening statement that Sorokin was exploiting a system that was “easily seduced by glamour and glitz” after she saw how the appearance of wealth opened doors. Spodek said she was merely buying time so she could launch a business and repay her debts.

“Anna had to fake it until she could make it,” Spodek said.

Sorokin, jailed since her arrest, faces deportation to Germany regardless of the outcome of the trial, because authorities say she overstayed her visa. Her story, however, may stick around. Shonda Rhimes, the force behind Grey’s Anatomy and Scandal, is developing a show about Sorokin for Netflix. Lena Dunham, of Girls fame, is working on one for HBO.

Sorokin arrived in the world of champagne wishes and caviar dreams in 2016 with a new name (Anna Delvey) and a wardrobe to match (Celine sunglasses, Gucci sandals and high-end buys from Net-a-Porter and Elyse Walker). She made a show of proving she belonged, passing crisp Benjamins to Uber drivers and hotel concierges, but she gave varying accounts for the source of her wealth, according to people who knew her.

At different times, they said, she’d claim her father was a diplomat, an oil baron or a solar panel muckity-muck. In reality, her father told New York magazine, he’s a former trucker who runs a heating-and-cooling business.

At first, people around Sorokin didn’t see a red flag when she asked them to put cabs and plane fares on their credit cards – she sometimes said she had trouble moving her assets from Europe, they said – and they laughed it off as forgetfulness when they had to hound her to pay them back.

“It was a magic trick,” Rachel Williams, the friend from the Morocco trip, wrote in Vanity Fair. “I’m embarrassed to say that I was one of the props, and the audience, too. Anna’s was a beautiful dream of New York, like one of those nights that never seems to end. And then the bill arrives.”

As she ingratiated herself into the New York party scene, prosecutors said, Sorokin started talking up plans to spend tens of millions of dollars building a private arts club with exhibitions, installations and pop-up shops. She thought about calling it the Anna Delvey Foundation.

Sorokin kept up the heiress ruse as she went looking for a $22-million loan for the club in November 2016, prosecutors said. She claimed the loan would be secured by a letter of credit from UBS in Switzerland and showed statements purporting to substantiate her assets, according to an outline of the charges.

One bank rejected Sorokin because she “did not have sufficient cash flow to make loan payments,” prosecutors said. She bailed on another firm when it pressured her for a meeting with a UBS banker who could verify her assets, prosecutors said. At the same time, Spodek said, one of the firm’s executives sent Sorokin provocative texts, telling her she was “beautiful inside and out,” that he was “forcing myself not to kiss you” and asking to come up to her hotel room.

While seeking the loan, prosecutors said, Sorokin convinced one bank to lend her $100,000 to cover due-diligence costs. She ended up keeping $55,000 and “frittered away these funds on personal expenses in about one month’s time,” prosecutors said. A few months later, in May 2017, Sorokin allegedly chartered a plane to and from the Berkshire Hathaway shareholders meeting in Omaha, Nebraska, but never paid the $35,400 bill.

Broke and facing a big bill at a midtown Manhattan hotel in July 2017, Sorokin pleaded with a police officer that a bailout was on the way, prosecutors said.

“I have no money and no credit cards. I’m waiting for my aunt from Germany. She’s going to pay,” Sorokin said, according to court documents. “I’m not trying to run. Why are you making a big deal about this? Give me five minutes, and I can get a friend to pay.”