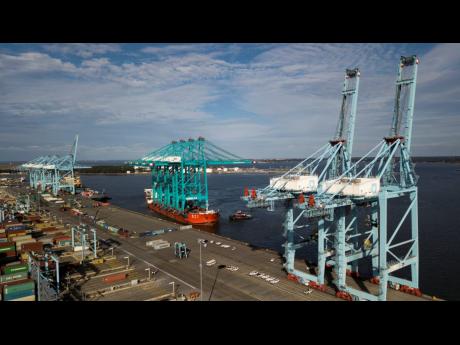 The U.S. trade deficit tumbled nearly 15 per cent in January as imports fell and exports rose. Shipments of American goods to China skidded to the lowest level in more than eight years as the world’s two biggest economies remained locked in a trade war.

The Commerce Department said Wednesday that the gap between the goods and services that the United States sells and what it buys from other countries dropped by 14.6 per cent to $51.1 billion in January from $59.9 billion in December. Exports rose 0.9 per cent to $207.3 billion, and imports dropped 2.6 per cent to $258.5 billion.

The Trump administration has imposed taxes on $250 billion worth of Chinese imports, and the Chinese have retaliated by targeting about $110 billion in American products.

The two countries are sparring over American allegations that China steals trade secrets and coerces U.S. companies to hand over sensitive technology in a sharp-elbowed campaign to make Chinese companies world leaders in advanced industries like electric cars and artificial intelligence.

U.S. and Chinese negotiators are meeting this week to move toward a resolution of the dispute, which has rattled global markets and threatened the outlook for the world economy.

Earlier, the Chinese had promised to buy more American soybeans as a goodwill gesture. And in January, U.S. soybean exports overall shot up to $1.2 billion from $299 million in December.

The U.S. also reported a sharp increase in exports of cars, trucks and auto parts in January.

President Donald Trump campaigned on a pledge to reduce America’s longstanding trade deficit with the rest of the world. He sees the gap as a sign of economic weakness and as the result of bad trade deals and abusive practices by America’s trading partners.

But last year the overall trade gap hit the highest level since 2008, and the deficit in the trade of goods with China hit a record.

Mainstream economists view trade deficits as the result of an economic reality unlikely to yield to changes in trade policy: Americans buy more than they produce, and imports fill the gap. The strong U.S. economy also encourages Americans to buy more foreign products.

U.S. exports are also hurt by the American dollar’s role as the world’s currency. The dollar is usually in high demand because it is used in so many global transactions. That means the dollar is persistently strong, raising prices of U.S. products and putting American companies at a disadvantage in foreign markets.