Nissan’s governance committee says Ghosn had too much power 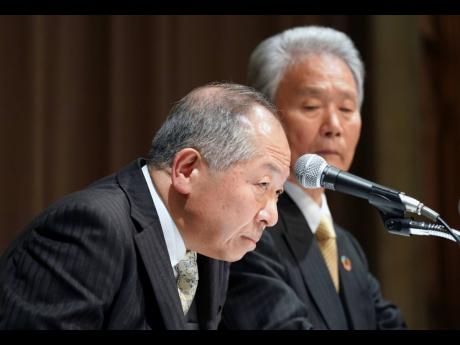 AP
Co-chairs of the Special Committee for Improving Governance, Seiichiro Nishioka, left, and Sadayuki Sakakibara, right, attend a press conference in Yokohama, near Tokyo Wednesday, March 27, 2019. Nissan’s committee, set up to strengthen corporate governance after the arrest of former Chairman Carlos Ghosn, is recommending the Japanese automaker add more independent outside directors on its board and better oversee compensation and auditing.

A Nissan committee set up to strengthen corporate governance after the arrest of former Chairman Carlos Ghosn said last week that an investigation found that he had wielded too much power and recommended that the scandal-hit Japanese automaker add more independent outside directors to its board and better oversee compensation and auditing.

In measures announced in Yokohama, where Nissan Motor Co is headquartered, the governance committee said it concluded that the “root cause of the misconduct was the concentration of all authority in Mr Ghosn”.

The committee’s findings, which were submitted to the company’s board, underline Nissan’s efforts to distance itself from Ghosn’s upcoming criminal trial.

Ghosn, who led Nissan for two decades and rescued it from near-bankruptcy, says he is innocent. Arrested in November, he has been charged with falsifying financial reports in under-reporting his compensation and with breach of trust in having Nissan shoulder investment losses and making payments to a Saudi businessman.

Seiichiro Nishioka, a former judge and the co-chair of the governance committee, said the investigation found that the problems were caused by what he called misconduct by an individual manager involving pursuit of personal gain and were different from past wrongdoing at some other Japanese companies such as accounting fraud.

The post of chairman at Nissan, which had been held by Ghosn, will be abolished, according to the committee’s proposals.

“The facts show there were governance problems at Nissan,” Nishioka told reporters, stressing that checks and balances needed to detect the wrongdoing were missing.

The governance committee has met several times, including to question Nissan executives to find out what led to Ghosn’s arrest.

Nissan Chief Executive Hiroto Saikawa has denounced Ghosn as the “mastermind” of what he called professional financial misconduct while declining comment on the criminal trial proceedings.

Ghosn has said that the compensation was never decided or paid, Nissan never suffered the investment losses, and the payments were for legitimate services.

The date of Ghosn’s trial has not been set, but it is not expected to start for several months, which is routine for Japanese trials. Ghosn was released on bail earlier this month.

Governance experts say Nissan lagged behind other major Japanese companies, including rival Toyota Motor Corp, in governance measures such as having outside board directors and instituting checks on compensation.

Bruce Aronson, an affiliated scholar at the US-Asia Law Institute, New York University School of Law, who has taught in Japan and serves as an outside director at a listed Japanese company, welcomed what Nissan was doing as “a good step forward, in line with other Japanese companies”.

In a telephone interview, Aaronson that said Ghosn’s case is providing valuable lessons for Japan amid rapid globalisation.

More than 90 per cent of major Japanese companies have two or more independent outside directors on their boards, a ratio that has grown rapidly since 2015, when a new governance code was passed.

Nissan’s evolving relationship with French alliance partner Renault SA complicates the issues. When Ghosn was sent in by Renault, Nissan sorely needed his help to cut costs and steer its way back to growth. These days, Nissan is more profitable than Renault, but many perceive Renault as wielding more managerial power.

Renault owns 43 per cent of Nissan while Nissan owns 15 per cent of Renault. The French government is the top stakeholder in Renault.