From jets to cheese: Trump wants to impose new tariffs on EU 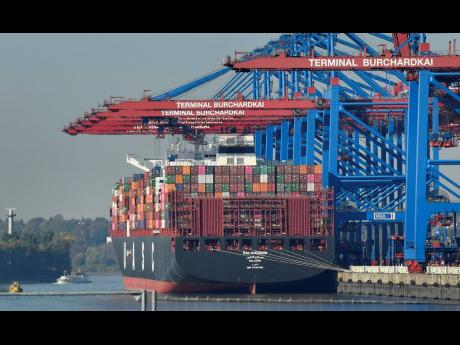 In this Monday, October 15, 2018 file photo, a container ship is loaded at the harbor in Hamburg, Germany. The United States is considering putting tariffs on $11 billion in EU goods per year to offset what it says are unfair European subsidies for planemaker Airbus.

The Trump administration wants to tax $11.2 billion worth of EU goods – from airplanes to Gouda cheese – in a move that some experts say marks another attempt by the administration to use tariffs to reshape global trade in its favour.

The import duties would be imposed if the World Trade Organization (WTO) rules in favour of the US this summer in a case over subsidies that the Europeans gave plane-maker Airbus. The Trump administration argues that the ruling would give it the legal right to make up for losses US manufacturer Boeing incurred.

But economists say the Trump team appears to want to use the ruling not merely to help Boeing but to heighten pressure on trading partners like Germany with which the US has a trade deficit. In the end, more tariffs could further raise consumer prices in the United States and weigh on the global economy at a time when it’s showing alarming signs of stress as the US wages a broader trade war with China.

After the US Trade Rep­resentative’s office issued a list of EU products it wants to tax, President Donald Trump took to Twitter to make the case.

“The EU has taken advantage of the US on trade for many years. It will soon stop!” Trump tweeted Tuesday.

The Trump administration’s list of European products to tax includes the types of helicopters and aircraft Airbus makes but also a wide range of European exports: famous cheeses like Stilton, Roquefort and Gouda, wines and oysters, but also more obscure exports like ceramics, knives and pajamas.

Chad Bown, a senior fellow at the Peterson Institute for International Economics, said it would be “a game changer” if the United States actually imposed tariffs on Airbus planes.

“We’ve never done tariffs on airplanes before,” he noted.

Normally, countries use favourable WTO rulings to compel trading partners “to give up the bad stuff they were doing” and don’t actually end up imposing tariffs. The Trump administration could be different.

While the size of the tariffs is small compared with the hundreds of billions the US and China are taxing in their trade war, it suggests a breakdown in talks with the European Union (EU) over trade. The US and EU have been negotiating since last year about how to avoid tariffs that Trump has wanted to impose, with little result.

Trump in June last year imposed tariffs of 25 per cent on steel imports and 10 per cent on imported aluminium from the EU in a move that seems aimed at helping the US industry but has also raised costs for many businesses that import these products.

The EU responded with tariffs on about 2.8 billion euros’ worth ($3.4 billion) of US steel, agricultural and other products, from Harley Davidson bikes to orange juice.

The US and EU have since July been negotiating how to scale back the tariffs, with Trump holding out the bigger threat of slapping tariffs on European cars – a huge industry in the region – should the negotiations not yield a result.

Whether the US gets the legal right to implement the new tariffs will depend on a ruling by the WTO, an organisation based in Geneva that sets the rules for global commerce and settles disputes.

After 14 years of legal wrangling between the US and EU, the WTO ruled in May last year that the EU had provided some illegal subsidies to Airbus, hurting Boeing.