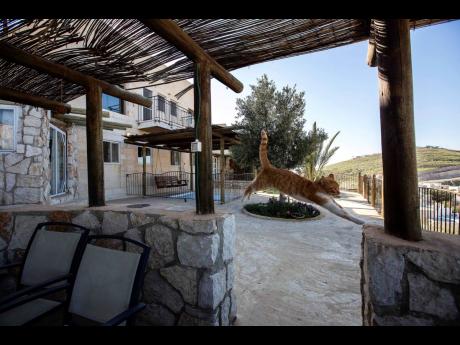 Airbnb is rescinding its plan to bar listings in Israeli settlements in the West Bank.

The home-sharing company announced in November that it would remove about 200 listings in the West Bank, which is territory claimed by Palestinians. Airbnb said Tuesday it will now allow properties in Israeli settlements to be listed, but will donate all of its profits from properties in the West Bank to humanitarian aid organisations.

The company said it will also apply the same approach in other disputed territories in the world, including South Ossetia and Abkhazia.

“We have always sought to bring people together and will continue to work with our community to achieve this goal,” Airbnb said.

“Donating profits from unlawful settlement listings, as they’ve promised to do, does nothing to remedy the human suffering they have acknowledged that their activities cause,” said the advocacy group Human Rights Watch in a statement. “By continuing to do business in settlements, they remain complicit in the abuses settlements trigger.”

But others celebrated the news.

“I believe other companies considering boycotts are going to take real note of the mistake Airbnb made and refuse to act against Israel and the Jewish community,” said Nitsana Darshan-Leitner, the director of the Shurat HaDin Israel Law Center, a Tel Aviv-based Israeli advocacy group.

San Francisco-based Airbnb was sued in US federal court by 12 dual US-Israeli citizens who own homes in the settlements. Airbnb’s reversal settles that case.

“As a provider of a service to the public, Airbnb is not permitted to refuse to provide services to selected religious groups to engineer who it thinks should be allowed to live where,” said Robert Tolchin, an attorney for the plaintiffs. “We are gratified that the legal process has worked.”

The plan didn’t affect about 20,000 other listings throughout Israel, including listings in other disputed areas like east Jerusalem and the Golan Heights.

Airbnb announced its reversal late Tuesday Israeli time, in the midst of the country’s national elections. During the campaign, Prime Minister Benjamin Netanyahu vowed to annex West Bank settlements if re-elected, a step that would likely end the remaining hopes of a two-state solution with the Palestinians.

Darshan-Leitner said she thinks Airbnb “intentionally sought out the busiest news day of the Israeli calendar in order to bury the story of their embarrassing walk back.”

Even after its announcement in November, Airbnb had slow-walked the decision. Listings in Israeli settlements continued to be available on its site, and visitors could book them well into the future. In a January blog post, the company said it was working with experts to identify precise boundaries “and ensure that our technological solutions attend to the relevant details”.

Political and legal pressure kept mounting. Amnesty International was among those pressuring the company to go even further and ban listings in east Jerusalem. At the same time, Texas, Florida and Illinois said they would prohibit any state business with Airbnb because of its stance on the listings in the West Bank settlements.

Airbnb’s rivals, Booking.com, Expedia and TripAdvisor, continued to offer properties in the settlements. TripAdvisor said it makes clear when properties are within Israeli settlements, and it uses the term ‘Palestinian Territories’ to refer to the West Bank and other areas.