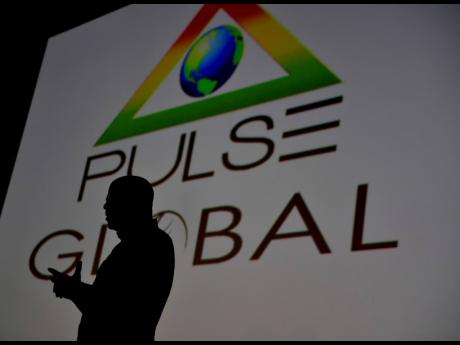 Gladstone Taylor
The Pulse Global logo forms the backdrop to Executive Chairman Kingsley Cooper’s silhouette, at the launch of the Pulse Global held at the Palace Cineplex cinema, at Sovereighn Centre in Liguanea, Kington on Tuesday, April 9, 2018.

That yearning is to be realised with the launch of Pulse Global, he says. Key to the global push is a foray into Africa, covering most of the continent in about three years.

“We’re starting with West Africa, then we go over to East Africa and then southern. That will take us over three years, because Africa is a vast continent and it can’t be done all at once. The good thing is that we have a television partner that goes across Africa,” Cooper told the Financial Gleaner after the mid-morning, red-carpet launch of Pulse Global.

He says Pulse has spent a lot of time consolidating its operations in the Caribbean and is now ready to spread beyond the region.

“The idea of taking the best of Caribbean fashion, designs and models, and aligning that with the best of African fashion and models, and you take that to the fashion elite establishments in London, Paris, New York and Toronto – it is a new dynamic, or even a quantum leap,” Cooper said.

Pulse is presently executing its latest model search. In Africa, that search is being done from Lagos, Nigeria, which is being used as a base to cover West Africa.

On the financial front, Cooper says Pulse has the backing of Nigeria’s largest bank, Zenith. As to the operational infrastructure, the modelling agency plans to work through local channels.

“We were able to identify that the best way to meet the global challenges is through partnerships. When we go to Africa, there is infrastructure there in terms of production, television and sponsorship in the form of Zenith Bank, the biggest bank in Nigeria,” Cooper said.

Other partnerships are being negotiated with entities such the British Fashion Council, an organisation that Pulse has worked with before, he added.

Cooper is not saying how large a budget the company is working with on the global initiative, but says the expenditure is substantial.

“We haven’t pinned it down to a hard number, but it’s millions of US dollars. Definitively, a lot will depend on the process, and we’re not going to do everything in one year. It will be spread over two-three years as we move from place to place,” he said.

The rollout in West Africa includes plans for a reality TV show this year. There will be model searches in the Caribbean and New York and a Peter Tosh Music Festival, and two joint African and Caribbean fashion events, one in Jamaica and the other in Lagos.

Cooper is hoping to leverage business from the events for Pulse’s hospitality unit, under which falls Villa Ronai and the Pulse Centre accommodations.

“This is all about moving our brand from being a Caribbean brand to a world brand. When you consider Pulse Leisure and so on, then you realise that we are talking about a transformed Pulse that is to be further transformed,” he said.