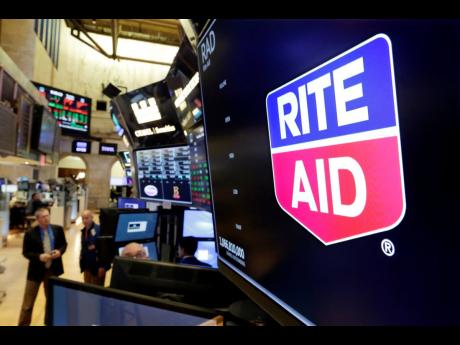 AP
The logo for Rite Aid is displayed above a trading post on the floor of the New York Stock Exchange.

Rite Aid will chop its share count by about 95% in a bid to push the remaining shares above minimum trading requirements on the New York Stock Exchange.

The board of the struggling drugstore chain approved a 1-for-20 ratio for a reverse stock split after shareholders backed the plan last month. That will cut the total number of outstanding shares from nearly 1.1 billion, to about 54 million.

Rite Aid shares slid below US$1 in December, prompting a removal warning from the NYSE. The drugstore chain said Wednesday after markets closed that on April 22, its shares will start trading on a split-adjusted basis.

The board approved the largest ratio out of three choices it had in the plan approved by shareholders. It also could have opted for consolidating 10 or 15 shares into one.

Shares closed at US 57 cents on Wednesday, but slipped early Thursday after the company said it lost US$273 million in its fiscal fourth quarter and US$422 million in the full year.

Rite Aid also said Thursday that it expects adjusted results for fiscal 2020 to range from a loss of a penny per share to earnings of four cents per share.

Analysts expect, on average, earnings of two cents per share, according to FactSet.

Rite Aid Corp, based in Camp Hill, Pennsylvania, runs 2,525 stores, mostly on the East and West coasts. It also operates a pharmacy benefit management business that runs prescription drug coverage for employers, insurers and other customers.

Rite Aid has struggled, like much larger competitors CVS Health and Walgreens, with reimbursement cuts and declining profitability from generic drugs. A relatively mild flu season also has not helped drugstore sales this year.

Rite Aid is also in the middle of a big management shake-up. The company said last month that several top executives would leave, including long-time CEO John Standley. He plans to depart once his successor is appointed.