Half of Cambridge already sold 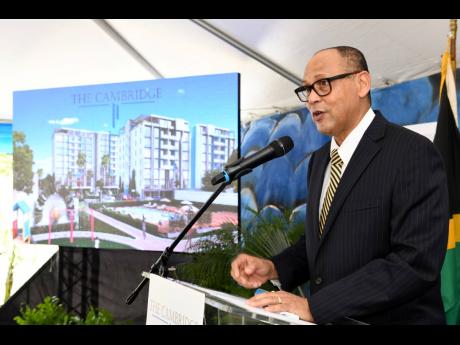 Ricardo Makyn
Eric Hosin, president of Guardian Life Limited, speaks at the launch of housing project The Cambridge on March 21, 2019.

Guardian Life has secured buyers for half of the 176 apartments it just began developing in New Kingston, mainly individual investors in Jamaica and overseas, but also pension funds.

Guardian President Eric Hosin said that the company opted to place nearly two-thirds of the development on the market ahead of construction, a tenth of which is yet to be sold but already has expressions of interest from prospective buyers.

The Cambridge is a $4-billion investment and the insurance company’s second luxury development in New Kingston in two years, both of which sit in proximity to its Trafalgar Road headquarters.

Construction of The Cambridge launched on March 21. The development comprises ­super­studios, one-bedroom units, and eight penthouses, spanning 10 floors on two towers that have been dubbed the Edge and the Elite.

Prospective purchasers were given the opportunity to view a unit at The Hampshire, the first housing development comprising 66 units that itself was sold out before the development was completed.

“The swift sales were due to a number of ­factors: targeted and strategic marketing of the units; the strategic location of the development; the sound and proven track record of the ­development; and the project team in the real estate market,” Hosin said.