Oran Hall | Ordinary shares, a tutorial for the newbie investor 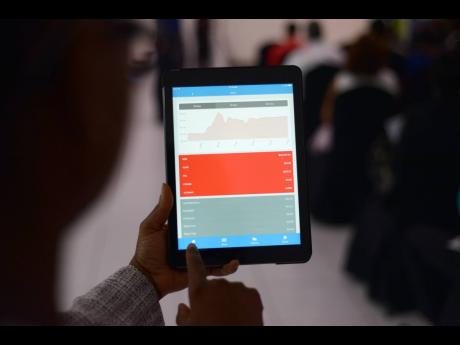 Gladstone Taylor
Trading activity on the Jamaica Stock Exchange is diplayed through the JSE mobile app.

Ordinary shares are securities which represent ownership in a company. The terms ordinary shares and ordinary stock tend to be used interchangeably, and their owners are generally called shareholders and sometimes stockholders.

As owners of the company, shareholders have voting privileges and participate in its profits by receiving dividends.

They vote at annual general meetings, and extraordinary general meetings – when these are deemed necessary. They vote on major decisions such as who should be the directors and auditors, and approve dividends, bonuses, stock splits and capital distributions recommended by the directors. They do not, however, get involved in the day-to-day operations of the company.

Dividends are payments made from the profits of the company to shareholders in proportion to the number of shares that they own. All shareholders receive the same sum for each unit of stock that they own. Companies do not, however, have a legal obligation to pay dividends.

The decision to pay a dividend depends on the level of profit for the financial year to which the dividends relate, the consistency of earnings over the years, the working capital position of the company, plans to develop and expand the company and the level of retained earnings.

The directors may choose not to recommend the payment of a dividend if there are plans for expansion in order to reduce the need to borrow. Retained earnings represent the profit that the company chooses not to distribute to shareholders. By retaining some of its earnings, a company increases the level of shareholder’s funds, described as shareholder’s equity.

Some companies distribute a small portion of their profits to shareholders but others distribute a high proportion. A company may vary its dividend policy as it sees fit. Shareholders should not expect a regular stream of dividend income such as monthly. Many companies pay dividends only once per year, others pay twice and a few four times.

Whether investors qualify to receive a dividend depends on when they purchase the stock relative to when the payment is to be paid. Only investors who are registered as shareholders on what is called the record date are entitled to a dividend. Further, stocks trade ex-dividend – without entitlement to a dividend – two days before the record date but the affected shareholders are eligible for subsequent dividend distributions.

Similarly, stocks trade without entitlement to a bonus or a stock split two business days before the record date. A bonus is a distribution of additional shares to qualified shareholders without them being required to pay for them. The funds to pay for these shares generally come from the retained earnings, and the distribution does not affect the nominal value of the shares.

A stock split is not a distribution. Rather, it is a subdivision of shares. For example, in a four for one split, or a four-way split, shares with a nominal value of, say, $1 are divided into shares with a nominal value of $0.25. In such a case, the amount of shares owned by the shareholder increases fourfold but the value of the holdings is unchanged.

Bonuses and stock splits cause the market value of the shares – which is not the same as the nominal or face value – to be adjusted, but this does not generally affect the value of shareholder’s portfolio considering the increase in amount of shares owned by the shareholder.

The major benefit that shareholders receive is appreciation in the price of the shares, which makes it possible for them to make a profit if they choose to sell them. However, share prices do not move in one direction. They also decline and the process of prices increasing and decreasing happens from time to time.

This does not necessarily mean that a stock is not making good profits. It is just that the stock market passes through various cycles over the course of time generally, but the prices of good stocks may also fall if their profits at a certain time fall below expectations.

Nevertheless, stock prices generally increase over the long term such that stocks are accepted as one of the best hedges against inflation. It is worth noting though that common stocks – also called equities – vary widely in quality and do not all react the same way to a development in the economy or the market, so it is best to have a well-diversified portfolio of stocks.

Although some companies list their shares on the stock exchange making it easier to buy and sell them, some stocks are not listed and trade on the far less active over-the-counter, or OTC, market. Companies do not generally buy back their shares from shareholders, but the market provides a convenient facility for shareholders to sell if they want and the stock exchange also provides a transparent and public means to determine the price of a stock. This is particularly useful for shareholders who wish to use their stocks as collateral for loans.

Stockbrokerage firms are authorised to trade shares on the stock exchange as agents for their clients and charge a commission for their services. Transactions are settled two business days after the execution of the order by the broker and the transfer of ownership is effected through the Jamaica Central Securities Depository.