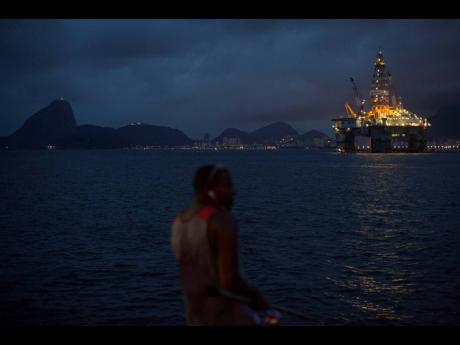 The Associated Press
AP In this April 21, 2015 file photo, a man fishes near a floating oil platform in Guanabara Bay in Niteroi, Brazil. The administration of Jair Bolsonaro plans to auction seven oil fields despite contrary advice from analysts of Brazil’s main environmental body.

The administration of President Jair Bolsonaro plans to auction seven offshore oilfields in the northeast despite contrary advice from analysts of Brazil’s main environmental body, according to documents obtained by the Associated Press.

Environmentalists say it’s the latest example of how Bolsonaro, who campaigned on promises to revive Latin America’s largest economy by cutting red tape, is pushing aside warnings and scientific evidence in the name of progress. It comes at a time when Brazil, one of the world’s largest oil producers and energy consumers, is moving towards the privatisation of several industries, including offshore exploration.

“There is no need to explore these areas,” said Carlos Rittl, executive secretary of environmental group Climate Observatory. “This decision is in line with a government that sees the environment as an obstacle.”

Brazil’s environment institute, called IBAMA, enforces legislation and aims to promote the sustainable use of natural resources. IBAMA analysts recommended against the exploration of oil in seven out of 42 offshore fields originally offered for auction in March by regulating body Brazilian Petroleum Agency.

Three of the fields to be auctioned in October are in the Jacuipe Basin and four in the Camamu-Almada region, both in the waters off the coast of the northeastern state of Bahia.

Appointed by Bolsonaro, the new head of the institute, Eduardo Bim, rejected its analysis, which warned that exploration of “highly sensitivity areas” could lead to spills.

The study, dated March 18, also said spills could lead to the destruction of the Abrolhos islands, an area of 353 square miles (913 square kilometres). Four of Abrolhos’ five islands are home to a marine national park with rare coral formations, tropical fish, whales, seabirds, turtles and dolphins.

The dispute within IBAMA was first published by daily O Estado de S. Paulo. The documents were obtained and verified by the AP.

IBAMA analysts said the blocks are in regions that have never been tapped, which require more “strategic studies that could evaluate the aptitude of the area”. The document said those studies are needed to give investors “more legal protection” in the case of an accident.

The analysts also wrote that a spill could get to the coast and the island chain within two days, and authorities would not be prepared to respond quickly or adequately to protect marine life.

“Add to that the fact the impact of a spill of large proportions over mangroves and corals are in general irreversible, harming the local economy and health,” the document said.

In response, Bim said in a letter to the environmental ministry, dated April 1, that he did not “see the need of exclusion of the (seven) fields as suggested by technical information.” He did not detail why he believed it was fine to ignore the warnings.

In a statement, IBAMA said that it, along with the environmental and energy ministries, agreed the auction was viable. The auction “means neither automatic authorisation for tapping oil and gas nor the anticipation of the result of the environmental licensing”. The institute said that studies on possible spills will still be required.

The statement also said that previous auctions were made in oilfields that sit closer to the Abrolhos marine park than the ones expected to go on sale in October.

Carlos Minc, Brazil’s environmental minister between 2008 and 2010, said he had blocked attempts to explore for oil near Abrolhos because the migration of whales and dolphins in the region would be affected by ships.

“Humpback whales left the list of animals under threat of extinction because of this. How could Brazil be taking this step back?” Minc said. “We have to stop them from destroying our marine biodiversity in the name of profits.”

Brazil is the world’s ninth-largest producer of oil in the world, and the third-largest in the Americas, according to the US Energy Information Administration. In 2016, Brazil produced 3.24 million barrels per day of petroleum and other derivatives. Brazil is also the eighth-largest total energy consumer in the world.

Bolsonaro has often said environmental protections should not block business. Before taking office on January 1, he promised to remove Brazil from the Paris Agreement on climate change. He has since back-pedalled, saying Brazil would remain in the agreement.

Earlier this month, the AP reported that Bolsonaro’s administration plans to drastically change a council that oversees the country’s environmental policy, replacing a broad-based panel with a small group of appointees.

IBAMA’s Bim and Environment Minister Ricardo Salles are among the authors of the plan.

According with Bolsonaro’s plan, IBAMA would soon absorb the attributions of the federal agency that protects conservation zones such as national parks and biological reserves, including the Abrolhos maritime park that would be endangered by oilfields.

Bim, Salles and the other authors of the study said in the plan that the move was necessary to streamline environmental governance and “avoid international interference” in Brazil.