Annual exports up by one-third 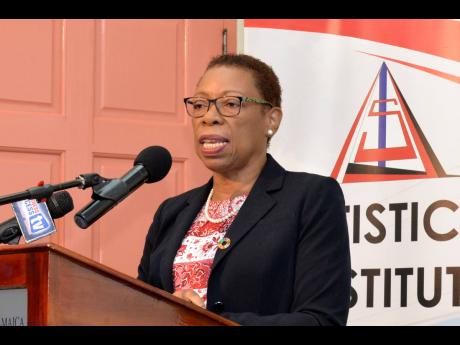 Carol Coy, director general of the Statistical Institute of Jamaica.

Jamaican exports grew by nearly 38 per cent last year, a pace that was nearly four times faster than the rise in imports.

Still at a value of US$1.88 billion, the goods that Jamaicans sell to foreign markets was less than a third of the products they buy from overseas. Imports in 2018 grew nearly 11 per cent to US$6.12 billion, according to trade data from the Statistical Institute of Jamaica (Statin). The result was an adverse trade gap of US$4.25 billion.

Statin Director General Carol Coy said that preliminary estimates of the calendar year 2018 indicate that the Jamaican economy grew by 1.9 per cent, due mainly to a five per cent growth in goods-producing industries and a 0.8 increase in the service industries.

As usual, mineral fuels, which includes oil, was the leading import category costing US$1.6 billion. That was followed closely by machinery and transport equipment for US$1.4 billion; food at US$900 million; chemicals for US$800 million and manufactured goods for US$700 million.

In the export category, mining and quarrying increased by 74.6 per cent due to higher volumes of alumina and bauxite.

Alumina was the major commodity exported to Norway, The Netherlands and Iceland.

The US was also Jamaica’s top import market from which it procured goods worth US$2.72 billion; China followed at US$397.8 million; Colombia US$351.1 million; and Japan US$255.7 million.

But earnings from CARICOM exports decreased by 1.1 per cent, from US$80 million to US$79 million in the same period.