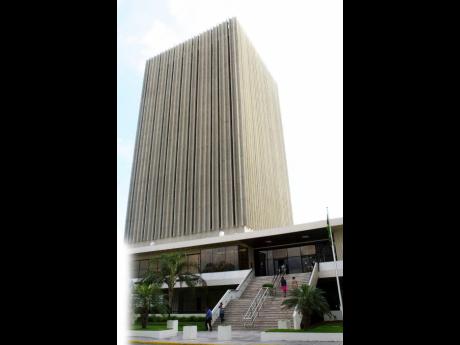 File
The Bank of Jamaica.

Jamaican households are servicing three times more debt than a decade ago.

The Bank of Jamaica (BOJ) is reporting that $56.60 of every $100 of household income goes towards the servicing of personal loans, the highest level mapped by the central bank to date.

The underlying reason for the rise relates to consumer loans growing three times as fast as income, each year, according to the central bank’s newly released Financial Stability Report 2018.

In 2009, household debt was the equivalent of $17 per $100 of income. At that time, the BOJ described the movement as a deterioration of household income “well above” average levels prior to the 2008 financial crisis.

Despite the rise, the BOJ categorised the household debt-servicing ratio as “moderate” over the review period.

Auto loans are one of the most sought-after products, and banks have been helping to drive the demand with single-digit rates, pre-approved loans, new credit cards, and increased credit card limits.

The BOJ said the lenders are seeking out opportunities to grow their loan books with Government’s reduced appetite for debt. The effect is a more stable macroeconomy but one in which household income grows at 3.9 per cent while household debt grows at 11.7 per cent per annum.

A banker who responded on condition of anonymity said that new banks are fuelling an already competitive sector. He reasoned that while the debt figure appears alarming, that it also reflects a widening of the employment sector and a lowering of interest rates, thereby allowing more persons to qualify for loans.

Ultimately, he rationalised, the banks do not make the final decision on loans.

“Remember, no one forced people to take out these loans,” the banker stated.

The report also revealed that when income runs out, households are dipping into their savings.

“Congruently, the financial liabilities to financial assets ratio for the household sector rose to 45.0 per cent from 42.4 per cent as at end-September 2017, reflecting increased leverage,” BOJ said.

As of February 2019, the loan market in the commercial banking sector was valued at $735.9 billion or 18.4 per cent higher year on year. Personal loans account for just under half of that amount of $360.6 billion of the industry total, according to provisional BOJ data.

Last year, the BOJ announced that the Financial System Stability Committee (FSSC) would begin to monitor the potential risks associated with rising household and corporate debt. The FSSC is a statutory committee, that provides oversight of financial stability assessments prepared by BOJ staff. It has eight members, among them the BOJ governor as chair and other officers of the central bank – the financial secretary, executive director of the Financial Services Commission, and CEO of the Jamaica Deposit Insurance Corporation.

Three years ago, the BOJ revised its definition of the debt-servicing ratio, which changed the calculation of household debt as a share of disposable income. It resulted in a near 20-point reduction in the ratio.

Prior to the revision, the 2015 report ­estimated household debt servicing at 69.5 per cent, which meant that roughly $7 of every $10 of household income went to paying down debt.