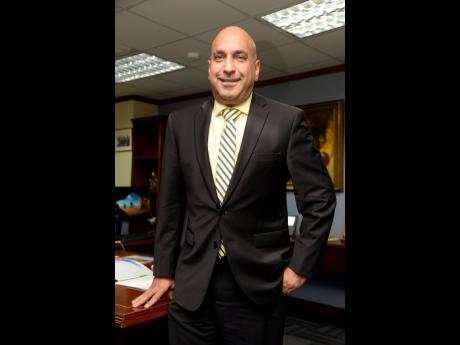 Year two of Christopher Zacca’s tenure as president and CEO of Sagicor Group Jamaica brought record profit amid a restructuring of the accounting for resort investment Playa.

But just in case anyone thought otherwise, Zacca is declaring he is hungry for more and is looking to mergers and acquisitions (M&A) to drive needed growth in the banking and investment segments of the financial conglomerate.

“We are always looking for merger and acquisition opportunities in the banking space,” Zacca told the Financial Gleaner in an interview this week.

“We have to be strategic about where. We are not limiting our view to Jamaica, but there is a lot of room here in Jamaica,” he said, even while declining to signal whether any deals were in the pipeline.

In December, the listed company acquired 51 per cent of Travel Cash, a little-known microfinance company of the Guardsman Group, for just under $360 million. Having installed new management, Sagicor is in the process of renaming and rebranding the entity for a phased roll-out of microfinance and small business products in a few months’ time.

This comes on the heels of a recent declaration that the company is pumping $2.6 billion to build out an investment banking outfit in the Cayman Islands.

Zacca says the Cayman investment vehicle, which awaits regulatory approval there, is intended to be a springboard for extending Sagicor’s investment banking reach throughout the Caribbean.

With its parent Sagicor Financial Corporation SFC, already heavily invested in insurance in markets like Trinidad & Tobago, Barbados and throughout the Eastern Caribbean, Sagicor Jamaica is concentrating on growing its banking and investment business in those markets.

“We are doing deals down there. We have done some syndication loans,” said Zacca, adding that a team, including Sagicor Bank CEO Chorvelle Johnson and Sagicor Investments CEO Kevin Donaldson, recently returned from the Eastern Caribbean where they were “looking at a hotel financing deal”.

In the wider Caribbean, Sagicor Jamaica is partnering with the investment side of the SFC business as well as collaborating with banks – Scotiabank, Republic and CIBC FirstCaribbean. Scotiabank has announced plans to exit some Caribbean locations and business lines. In Jamaica, Sagicor is acquiring Scotia Group Jamaica’s life insurance business under a larger regional deal between Sagicor Financial and Scotiabank.

“We work with all of them. The truth is, when it comes to finance on the banking side, it doesn’t suit any entity to try and hog the whole show,” said Zacca. “You want to work with the entire sector to manage risks and to really leverage your size to get more and more deals. So that’s our approach,” he said.

Despite its so far spotty record, Sagicor Jamaica also has its eyes set on markets of the Spanish Caribbean and Latin America, content for now to regard its largely unprofitable joint venture insurance partnership in Costa Rica with Banco Promerica as a “learning curve” for an eventual expansion into other similar Spanish-speaking jurisdictions. Sagicor has operated in Costa Rica since 2013.

“It’s not costing us money. It is not a cash drain,” Zacca said of Costa Rica’s contribution. After posting a $10-million loss in 2017, Costa Rica appears to have contributed to group revenues in 2018, with $18 million attributed to “profits from joint venture”.

Zacca, who on May 4, 2017, took over the mantle of leadership at Sagicor Group Jamaica from Richard Byles, the current chairman, knows that he has no learning curve and must maintain the Sagicor tradition of profit growth year-on-year.

He recounts among the biggest challenges of his tenure the changing macroeconomic environment that compresses net interest and other fee income throughout the business lines. He points out that with drastically lower interest rates and less government paper, there has been the need to more aggressively drive core business rather than rely on assets earning big profits.

“We have had to really crank up sales of insurance – individual, group health, group life. Come out of the balance sheet-type investments and go on to managed funds and corporate finance to earn fee income. On the banking side … drive payments, credit cards, services, more loan business,” he said.

“Get back to basics and drive revenue from core business – that is what I love. I love to get a real business and just drive it. We are focusing on that and it is paying off.”

But revenues were bogged down by underperforming fee income to Sagicor Investments Jamaica Limited.

Zacca also had to contend last year with the strong headwinds of a $875-million impairment provision against credit losses on investments in defaulted Government of Barbados bonds. Add to that, stock value losses on the 20 million shares or a 15 per cent stake in Playa Hotels and Resorts NV, along with US$100 million in cash, which Sagicor Group received last June in return for combining some $39 billion of its hotel assets with Playa.

At the time of the deal, the Nasdaq listed Playa shares traded at well over US$10. On Tuesday, when Zacca spoke with the Financial Gleaner, the stock traded at US$8.21. The volatility of the equity led Sagicor to change its accounting of the Playa holding from a portfolio investment taking its share price to book, to reflecting it as an associate. Sagicor Group’s financials now reflect a share of Playa’s book value and profits.

Zacca is upbeat that when Playa’s ultra-luxury Hyatt-branded property being built in the Dominican Republic, as well as two others in that country and Mexico being rebranded as Hilton properties are back online, the hotel chain’s earnings will increase significantly, and drive up the Playa share price in the process.

Meanwhile, Playa’s planned investment of some US$200 million to build another 760 hotel rooms in Jamaica to 2021 is said to have been delayed by the significant cash requirements of the Dominican and Mexican projects.

Since Zacca’s tenure as head of Sagicor Group, the management team around him has undergone substantial changes. Rohan Miller and Ingrid Card now have jobs at Sagicor Financial Corporation; Chorvelle Johnson was headhunted from Proven Wealth to replace Donovan Perkins, who left the group; Kevin Donaldson took over Miller’s former job as CEO of Sagicor Investments; Alysia Moulton White now has the communications portfolio that Card held; and most recently group vice-president for strategy and chief information officer Phillip Armstrong has exited.

Sagicor is now seeking a new CIO, but Zacca says he has taken strategy directly under his portfolio as group president.

The company’s head of enterprise risk and compliance, Hope Wint, also resigned and has been replaced by Danielle Davidson, a new hire from Bank of Jamaica, who started April 1.

Zacca doesn’t share the characterisation of these changes as a management shake-up.

“It’s not a shake-up as such. It’s really just a realignment (based on) the priorities of the company. We took the opportunity to do it all at once but some of them have been in discussion for months,” he said.

“Change is good. I have my own team in place – a mixture of some of the old with some of the new. They have brought a fresh approach, they are energised, their teams are energised and the results are showing it. So, I think that I am settled with my leadership team of the four business lines and I feel I have a very strong team in place,” he said.