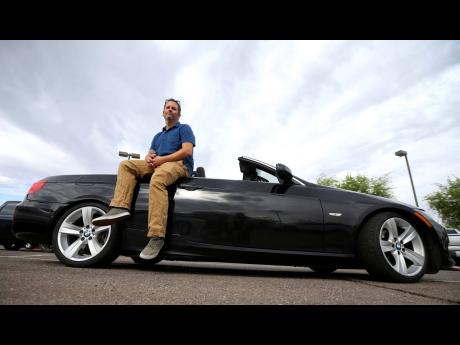 AP
Chris Williamson poses for a photo sitting on his car in Phoenix on In this April 23. Williamson bought a BMW 3 Series convertible and covers the payments by renting it to strangers on a peer-to-peer car sharing app called Turo.

When Chris William-son was in the market for a new family car, a timely ad and conversations with a co-worker convinced him to try something out of the ordinary. He bought a BMW 3 Series convertible and covers the payments by renting it to strangers on a peer-to-peer car sharing app called Turo.

It allows his family of seven to have a nicer car, essentially for free.

“It’s great to have that little bit of extra income and not have to worry about the car payments,” said Williamson, a teacher from the Phoenix area.

But his customers and others using car-sharing apps around the United States get their rentals tax-free. That’s made them a target for rental car companies, airport authorities and local governments. They say users of the upstart apps should pay the same taxes and fees that come with traditional rental cars.

At stake is hundreds of millions of dollars in revenue that cities and airports count on to pay for stadiums and convention centres, or to fund police, fire and other general operations.

“These companies are very sophisticated, technology-savvy companies that have hundreds of millions of dollars invested in each of them,” said Ray Wagner, senior vice-president for government relations at Enterprise Holdings, parent of the nation’s largest car-rental firm. “They should be expected to comply with the same rules as a small, mom-and-pop rental car company located in rural Arizona.”

Car-sharing companies, including Turo and GetAround, function like Airbnb for vehicles, allowing people to rent out their cars when they’re not using them. Founded about a decade ago, they’ve taken off recently with the help of millions of dollars from venture capital firms and other investors.

That’s put them in conflict with the US$42 billion-per-year rental car industry, and the tourism and government agencies that tax it and regulate safety and consumer protections.

The battle is heating up in some three dozen state legislatures as well as the courts and offices of local tax authorities. Barraged with lobbying from both sides, lawmakers are grappling with how to regulate an emerging industry without destroying it – a repeat of recent fights between the taxi industry and Uber and Lyft, and between hotels and Airbnb.

“The tragedy would be if we snuffed out something like this in its infancy that has a lot of great potential,” said Arizona Rep Travis Grantham, a Republican who has introduced legislation backed by Turo that would exempt car-sharing from all rental car taxes, except the standard sales taxes.

Tourism taxes have long been popular with politicians who can use surcharges on hotel rooms and rental cars — paid largely by visitors who vote elsewhere — to raise money for local priorities.

Forty-four states levy excise taxes on rental cars — on top of the standard sales tax, if one applies — and most allow local governments to levy their own as well, according to a March study by the Tax Foundation, a conservative think tank. Airports often add surcharges to pay for sprawling rental car facilities.

Taxes, fees and surcharges can add as much as 30 per cent to the cost of renting a car while generating millions of dollars.

In metropolitan Phoenix, the baseball league that draws fans to 10 stadiums for spring training every March could see a sharp decrease in revenue as the new platform for car rental grows, said its president, Jeff Meyer. Rental car taxes help cover debt payments for some of the Cactus League’s facilities and for the Arizona Cardinals football stadium.

California, Oregon and Washington passed legislation on car-sharing years before the industry took off, and Maryland did so last year. Bills governing the practice have been introduced in more than 30 other states, with the fight especially contentious in Alaska, Arizona, Colorado, Florida, Illinois, New Mexico and Ohio.

Turo also is fighting in court with Los Angeles and San Francisco airport authorities, which contend the company should pay fees. Meanwhile, Chicago tax authorities wrote that car-sharing is subject to rental car taxes in response to questions from an Enterprise lawyer, according to a letter provided by the company.

In Arizona, Enterprise is backing legislation that would tax car-sharing like rental cars and require them to enter agreements with airports to use their facilities, while Turo supports a proposal that would exempt car-sharing companies from most taxes.

In Ohio, a detailed package of new regulations on car-sharing companies was tucked into the House version of the state transportation budget. It came as the Columbus Regional Airport Authority broke ground on a new US$140-million car-rental facility that relies on a steady stream of car-rental user fees.

The peer-to-peer companies won a temporary reprieve last month, when the provision was dropped from the bill. But Ohio Senator Bob Peterson, the No. 2 Republican, said he anticipates a stand-alone regulatory bill will be introduced soon.

“I think everybody was agreed this is a new industry that needs some more regulation,” Peterson said.

Both sides portray their position as a matter of fairness.

Those supporting stricter regulations say people who rent out their cars for profit should not only pay the taxes, but meet the safety and transparency requirements that go with renting a car.

“The goal is levelling the playing field,” said Arizona Representative David Livingston, a Republican who is sponsoring legislation to treat car-sharing firms like rental car companies. “You want all these companies operating with the same type of rules and regulations so they can compete and the best one wins, whoever that is.”

Turo’s lobbyists point to the billions of dollars car-rental firms save on taxes. Most states charge no sales tax for vehicles sold exclusively for rental, and allow those companies to pass along vehicle licensing fees to customers.

Turo asks why its users should pay rental taxes if they’re not exempt from other vehicle taxes that benefit rental car companies.

“Our host community is individuals that are just trying to offset the cost of a car,” said Steve Webb, the company’s vice president of communications. “And Enterprise is this US$24-billion Goliath that is using their political connections to stifle innovation.”

Turo says more than 95 per cent of Turo’s 197,000 “hosts” share three or fewer cars on the platform. But some of the company’s 350,000 listed vehicles are owned by people who rent out small fleets.

Wagner, the Enterprise executive, calls it a “politically motivated fiction” for Turo to focus on taxes paid by people who occasionally list their car.

For Williamson, the Phoenix teacher who rents his BMW through Turo, the prospect of his customers having to take on those taxes and surcharges is concerning. The people who rent his BMW are looking to splurge. He also sometimes rents his family’s Honda Pilot SUV.

“Anytime you start to creep the price up for anything, you’re going to get people who say, ‘Oh, I guess we won’t take the convertible this weekend. We’ll just take whatever Hertz has on special,’” he said.