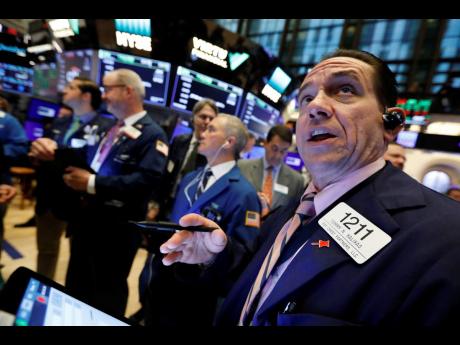 AP
Traders on the floor of the New York Stock Exchange on April 18. The stock market keeps going higher, but fees to own funds keep going lower.

Investors paid less to own funds last year than ever before: about US$48 in expenses for every US$10,000 invested, according to a study by fund tracker Morningstar. That’s roughly half of what investors paid in 2000, when expenses ate up US$93 of every US$10,000 invested. Last year alone, investors saved a cumulative US$5.5 billion thanks to the drop in fees from 2017, the second-largest decline on record since 2000.

“Every US$1 is worth fighting for,” said Ben Johnson, director of global ETF research at Morningstar. “And that’s US$1 today that can be many dollars down the road.”

Index funds have played a big part in the declines in fees. Instead of hiring teams of analysts to winnow out the best stocks and bonds, index funds merely try to track the S&P 500 or another index. That allows them to keep costs low, and passive funds kept US$15 in fees on every US$10,000 invested last year. Fierce competition has whittled down that number — it’s fallen from US$25 a decade ago. Some funds now even charge zero in fees.

But investors themselves are also driving the trend by voting with their dollars. They moved a net US$605 billion into the funds that rank in the bottom 20% of their category for fees last year. Among all the other funds, investors yanked out a total of US$478 billion. Much of that movement has been at the direction of financial advisers, who increasingly are charging fees for their service rather than getting commissions for buying specific funds.

The average actively managed fund still charges about 1.8 times as much as the average index fund. But these funds have a wide range of expenses, and of the select few that investors have been seeking out, it’s typically been the lowest cost ones.

With so much pressure on fees, the industry has been introducing more funds that act almost as a hybrid of index and actively managed funds.

Like an S&P 500 fund, these hybrid funds track an index. But these indexes are more fine-tuned and follow strategies that are similar to ones active managers use. Some ‘low volatility’ funds track indexes that include only stocks with smaller swings in price than the broad market, for example. Others follow indexes that hold only stocks whose prices have the highest momentum.

The industry calls these ‘smart beta’ funds, and last year smart beta stock funds had an expense ratio of 0.17%, meaning they kept US$17 of every US$10,000 invested. That’s in between the US$8 for traditional stock index funds and the US$70 for actively managed stock funds.

Investors should be careful not to shop only by fees, though, said Morningstar’s Johnson. How the fund is constructed matters just as much — if not more. One low-volatility fund may have slightly lower expenses than another but track a much different index, which ends up leading to big differences in returns.

“Focusing too narrowly on fees can become a risk,” Johnson said.