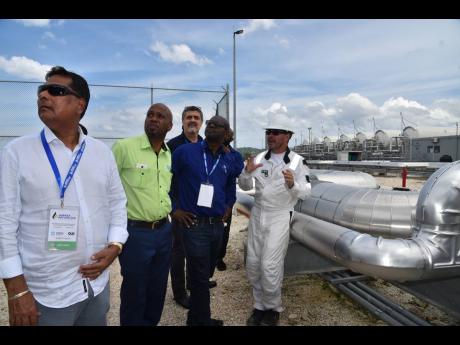 File
The Bogue plant in Montego Bay was the first facility in Jamaica to be converted to LNG back in 2016, and electricity consumers footed US$17-million project bill. Participants in the oil and gas industry are seen here touring the facility on October 6, 2017. 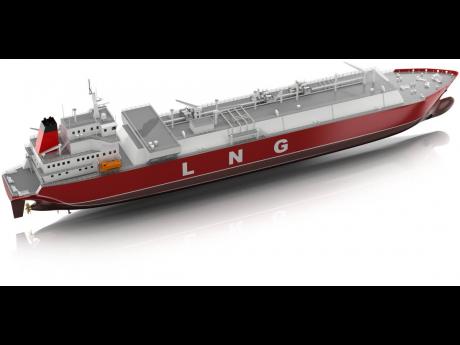 Graphic of an LNG supply ship.
1
2

Another 284MW of generating capacity fired by LNG, or liquefied natural gas, is to be added to the national between now and 2020 and Jamaica’s electricity consumers are expected to foot the bill.

The Office of Utilities Regulation (OUR) said the funds would be collected as a tariff, similar to the mechanism utilised to fund the conversion of the 120MW Bogue station in Montego from heavy fuel oil to a combined cycle plant fired by either LNG or automotive diesel oil.

The Bogue Project Reconfi-guration Fund, BPRF, raised US$17 million. The OUR did not say how much funds were needed for the future projects, nor which plants they covered.

OUR Communications Manager Elizabeth Bennett said Thursday that the specific projects would be determined during the next tariff review. JPS tariff reviews are done on five-year cycles and one is now due.

However, the 284MW of capacity quoted by the OUR appears, on the face of it, to comprise the ongoing 190MW development at Old Harbour that is costing JPS US$300 million to build, as well as the Jamalco refinery project that is expected to add 94MW to base load.

The Jamaican Government is part-owner of the Jamalco alumina refinery in partnership with the Noble Group.

The Bogue Fund was financed through a tariff collected by Jamaica Public Service Company (JPS) through a line item in the monthly fuel rate calculation on customers’ bills. The collections ranged over a 12-month period.

“The BPRF, established specifically for the retrofitting of the 120MW Bogue plant, ended in 2016. However, another 284MW of generating capacity, fired by natural gas, is schedule to come on to the grid over the 2019 -2020 period. These new plants will be captured in the tariff,” the OUR told the Financial Gleaner.

“These new plants are more efficient than the old plants they will replace,” the regulator said.

The JPS has said it intends to continue doing business with current LNG partner, New Fortress Energy, as it move towards switching its main fuel source to natural gas over the next four years.

Last week, in his address to Parliament, Opposition Spokesman on Energy and Mining Phillip Paulwell called for more transparency around pricing and the tabling of regulations for the sector.

“The guidelines and regulations must encourage competition, not a monopoly,” Paulwell said in his speech to Parliament. “Competition will lead to new investments, resulting in better prices for the consumer and a more robust industry for the country.”

The OUR confirmed that the Jamaican Government intends to introduce legislation to govern the LNG market, but details of the timeline and status of the drafts were not forthcoming.

It’s meant to address market weaknesses such as “monopoly excesses and uncompetitive practices,” the OUR said, while speaking in broad terms on what oversight legislation is meant to accomplish.

Minister of Energy Fayval Williams said she was working on a response to the queries on what the regulations would embody.

In a follow up to his presentation, Paulwell told the Financial Gleaner that regulations which could guide investment in the LNG sector had been drafted, but were yet to be tabled.

He said a ceiling of 12.89 US cents/kWh had been previously approved by Cabinet for LNG pricing, but it’s unclear whether that was being upheld.

The OUR said in response that the price point referenced by Paulwell was set by ESET, a body that was created by Cabinet to oversee development of the LNG sector. The price was based on avoided costs and is adjusted by US inflation and other factors detailed in the power-purchase agreement between JPS and its current LNG supplier, New Fortress Energy, the regulator said.

The OUR also disclosed the price of electricity from JPS’s Bogue plant in Montego Bay, which was converted to LNG over two years ago, is now 10 US cents per kilowatt hour.

The JPS head of communications Winsome Callum said the utility does not break out costs per plant, but told the Financial Gleaner that electricity was being distributed to Jamaicans from the grid at an average price of 25 US cents per kWh.

The JPS said in April that nearly 25 per cent of grid electricity was fired by LNG, and that would move to 80 per cent in four years.

It will result in New Fortress Energy, an American company, replacing state-controlled Petrojam as the main supplier of energy to JPS.

Paulwell said that given the stated intent to establish an LNG hub in Jamaica for regional distribution, pricing for the gas should have fallen at this stage.

“Where there are benefits that flow from increased activity – for example, if there is a hub established in Jamaica – the costs of establishing it would have been shared by everybody, and so we want Jamaicans to benefit from the increased gas throughput,” said the energy spokesman and former minister in charge of the energy sector when his party was in power.

He argues that the legislation will allow for transparency and clarity on pricing and issues of taxation, saying the latter element would become important at the level of the household when the sector gets to the stage of piping LNG into homes.

“I want to make sure that pricing is as determined by Cabinet, and, importantly, that when volume increases, Jamaicans benefit from cheaper prices,” he said, referring to the LNG agreements now in place with JPS.

“You can only have those things enshrined by way of regulation,” he asserted.

Like JPS, the OUR said electricity prices are not determined by separate pricing mechanisms for the various plants, as the costs are integrated.

But: “It is significant to note that since [Bogue] was converted, there have been savings of over US$30 million in fuel costs. This is significant since fuel costs are a direct pass-through to customers,” the utilities watchdog said.

The OUR added that LNG prices on the international market have remained stable over the past 16 months, and natural gas prices are forecast to remain fairly constant over the next five years.

The JPS has said that all its heavy fuel oil plants will be retired and replaced with combined-cycle facilities that are fired by gas or, alternatively, automotive diesel oil. The upcoming conversions include its plants at Hunts Bay and Rockfort in Kingston.