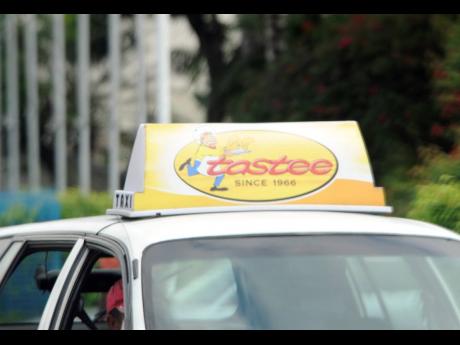 File
A mounted Tastee patties advertisement sits atop a roving taxi in this Gleaner file photo. Tastee Limited has ended its franchise arrangement with 360 Restaurants Limited in Portland in April 2019 but is yet to find a replacement partner.

Robinson, whose company now trades as Patty Express, says he remains in the patty business as a wholesale and retail distributor for Juici patties and Mother’s patties, both of which are rival operations of Tastee’s.

The rebranding of the company from Tastee Express to Patty Express is under way, he said.

Neither of the parties has disclosed the substance of their disagreement, but both have made pointed references to the number of sales points operated by 360 Restaurants in separate advertisements.

On Tuesday, Tastee Limited told the Financial Gleaner that cutting ties with 360 Restaurants was a business decision that it would not comment on in detail, citing “the confidential nature of the relationship between Tastee and its franchisees”.

The franchise agreement ended on April 6.

It has left the patty maker without a franchisee or outlet in Portland, but Tastee said “steps will be taken to ensure that the needs of our customers in that market are met”, without specifying what those arrangements would entail.

The rift between the two became public when Tastee placed an advertisement advising that Robinson’s E-Payments Limited, 360 Restaurants Limited and Patty Express were not its franchisees or distributors.

On Wednesday, Robinson’s company issued its own notice, naming Patty Express as a former six-location franchisee of Tastee – including mobile units in the towns of Ocho Rios, Highgate, Port Maria, Annotto Bay and Port Antonio, and a store in Port Antonio – that “continues to expand its operations across Jamaica and has now ceased from selling Tastee and/or associating itself with Tastee to becoming official wholesale and retail distributors for both Mother’s Patties and Juici patties.

“As the largest selling non-manufacturer of patties in Jamaica, Patty Express will be expanding its footprint, widening and diversifying its menu options,” the ad read.

The leased space was retrofitted to Tastee standards, Tastee Limited said back then.