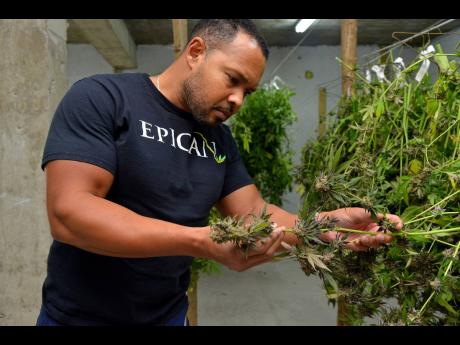 Integrated cannabis firm Epican is now rolling out its second store at a prime location along the Jimmy Cliff Boulevard in Montego Bay otherwise called the Hip Strip.

Then later this year, it will add three more retail shops in Negril, Falmouth, and Ocho Rios.

The size of the investments was not disclosed.

Epican CEO Karibe McKenzie says he has spent the last two months outfitting the Montego Bay shop and training staff, while waiting for the Cannabis Licensing Authority (CLA) to finalise and issue the permit.

“It’s been a bit painful since we’ve had a lease on the spot for over a year now and we just got the approval three weeks ago and moving towards opening on Saturday,” said McKenzie in an interview on Thursday.

The new store sits in a heavily trafficked tourist area of the resort city.

“Kingston has performed extremely well, and we anticipate that Montego Bay will perform even better,” McKenzie said.

Epican’s first branch operates from Market Place on Constant Spring Road in Kingston. The company operates a marijuana farm in the Blue Mountains area under a growers’ licence from the CLA.

McKenzie says the farm has 10 greenhouses on a one-acre plot, with a capacity of 150 pounds of the weed per month.

“We’re vertically integrated so we supply ourselves. Our farm and processing departments will be supplying this retail outlet also,” he said, referring to the MoBay shop.

Epican also supplies other licensed cannabis traders engaged in retail, he added. He said the company had a transporter’s licence pending, but in the interim, the CLA facilitates the movement of product from the farm to the retail outlet.

He adds that the company has the capacity to do more business but is constrained by regulatory strictures.

“From a business standpoint, yes, it is frustrating because you can well imagine that the entry point is not cheap, and we’ve put out significant sums to build a robust infrastructure while at the other end, we’ve not been able to roll out the other part of the business plan,” McKenzie said.

The decriminalisation of cannabis came with the amendment of the regulations for the Dangerous drugs Act in 2015. The amendment established a regime that allows cannabis users to possess up to two ounces of the drug for personal use.

The CLA was created to oversee the market, including cultivation, transportation, and retailing for medicinal use of the drug.