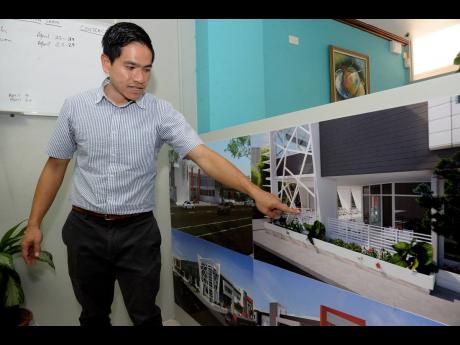 The family has a longer history in the grocery retail market, but is now putting money into real estate development, rental and sales, to drive earnings and profits.

Having bought the former Baron’s Plaza on Constant Spring Road, remodelled and rebranded the property as Commerce Gate and leased it to the Government to house the Ministry of Justice, Winston Lee and his son, Johnathan Lee, the principals in Josa Investments, are doing a massive redevelopment of the New Kingston Business Centre.

Located in the heart of the financial and business district, the two-storey, one-time shopping centre that later added meeting rooms for rental is being updated and transformed into a mixed-use commercial complex with shops, restaurants, professional suites and an 800-seat business process outsourcing (BPO) facility.

The multistorey call centre is being built in an area in the middle of the mall that once housed an open-air amphitheatre and will occupy all the space of a third floor now being added over half of the building.

The principals declined to disclose a figure for what looks to be a major investment in the transformation of the property, nor the price paid to acquire the building from the Cable and Wireless Pension Fund two years ago.

The redevelopment project is being financed by a mix of bank loans from First Global Bank and from other investors the Lees have declined to name.

Tax Administration Jamaica records show a land valuation of $270 million for the property, which is said to be 9,205.39 square metres in size. Real estate sources say property valuations for commercial land with buildings in the Kingston and St Andrew area range between $37,000 and $52,000 per square metre.

The commercial centre remains open for business amid major 24-hour BPO space construction that includes foundation work in the basement, which has been used for covered parking and is the compulsory exit route from the complex. Consideration is being given to adding a multistorey parking garage.

The redevelopment is being done in two phases: the updating of existing units with some space reconfiguration which started over a year and a half ago and is almost complete; and BPO space to be built by May 2020. With that, rentable space will nearly double from 66,000 square feet to 120,000 square feet in a property spanning 176,000 square feet of total space.

The remodelled centre will see the food court, previously located in a partially enclosed area upstairs, being moved for visibility to street-facing units on the ground floor with terraced dining areas. Two existing restaurants have already been relocated.

All shops will now be on the ground floor, with professional suites situated on the second floor. Facilities Supervisor Sharon Atkinson said applications have been received and are now being considered for all available spaces. Some major local and international food concessionaires are expected to set up shop in the new food court.

The Lees acknowledge that a few tenants have opted to exit the centre due mainly, they say, to issues unrelated to the tenancy arrangements.

“Some may have decided to leave of their own free will, but for the most part, we have tried to accommodate everyone as best we can,” Johnathan said.

Josa Investments was formed about 14 years ago by some members of the Lee family, operators of the long-standing Lee’s Food Fair supermarket, which has been in business since 1958. Other Josa Investments directors include Sandy and Yan Zhang Lee.

The Lees also operate a speciality Chinese grocery business that morphed into a health food venture, called A Fresh Approach. A third of that operation, they say, has been wiped out due to the disruptions from the ongoing roadworks along Constant Spring Road.

The Josa principals say the real estate venture business started with modest acquisitions, upgrading and sale, including a property at Goodwood Terrace, off Constant Spring Road. The company also owns property at 67 Red Hills Road, which houses a Burger King store and a Chinese restaurant.

The timing of the major real estate forays coincides with the lowering of interest rates, which has encouraged developers to borrow, Winston Lee said.