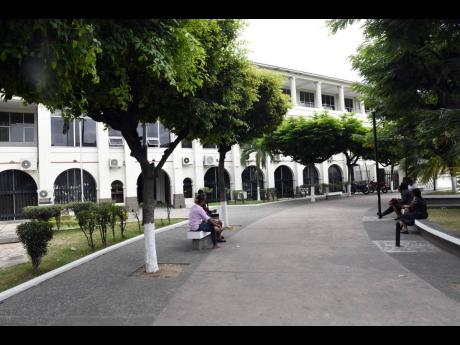 A section of the law governing court procedures has been declared unconstitutional by the Court of Appeal, a decision that likely sets the stage for new challenges to past default judgments issued by the Supreme Court.

A default judgment is entered by the court in circumstances where the defendant in a civil case, that is, the person or entity being sued, does not contest the lawsuit or otherwise fails to file a defence.

Last month, the Court of Appeal declared as unconstitutional the section of the Judicature (Rules of Court) Act that bars a defendant in civil proceedings, against whom a default judgment has been entered, from actively participating in a hearing during an assessment of damages.

It also declared unconstitutional another section of the act – also referred to as the Civil Procedure Rules (CPR) – that provides for notice to be given only to the claimant in the case regarding the date, time and place fixed for the hearing of the assessment of damages.

Efforts at comment from members of the legal fraternity on what the judgment implies for past cases were unsuccessful.

Rule 12.13 dictates that a defendant against whom a default judgment has been entered does not have the right to fully participate in proceedings at the assessment hearing.

Such a defendant has no rights in relation to cross-examination, the making of submissions or the calling of witnesses, Justice Carol Edwards observed in the appellate judgment.

The ruling, which was unanimous, flowed from a case involving appellant Al-Tec Inc Limited, which on May 4, 2007, entered into a contract with James Hogan and Renee Lattibudaire for the sale of a parcel of land, referred to as South Sea Park, in Westmoreland. The attorney general of Jamaica joined the case as an interested party.

The purchase price for the land was listed as US$580,000, which at the time was equivalent to $38.28 million. The terms of the contract dictated that an initial payment of US$87,000 or $5.74 million would be made upon the signing of the agreement and the balance within 45 days, in exchange for the duplicate certificate of title.

Hogan and Lattibudaire obtained a surveyor’s identification report dated May 23, 2007, which outlined several defects to Al-Tec’s title that they decided not to accept.

On June 19, 2007, they gave the company seven days within which to complete the sale; and when the period elapsed, they cancelled the agreement and requested a reimbursement of the relevant costs incurred, which included the surveyor’s report, valuation assessment and attorney’s fees for handling the sale.

Al-Tec paid back the sum refunded by the Stamp Commissioner, half the cost of preparing the contract, and the amount Hogan and Lattibudaire paid as deposit.

Hogan and Lattibudaire subsequently sued Al-Tec to recover the other costs and following a default judgment against the company, they were awarded general damages of $9.05 million, special damages of $1.98 million and US$17,700 with interest.

Al-Tec appealed on several grounds, one of which was that the trial judge wrongly applied Rule 12.13 of the Civil Procedure Rules 2002 as a barrier to the company’s efforts to contest the judgment at the assessment of damages.

“Rule 12.13, construed and applied as it is by the trial Judge, infringes the appellant’s right to a fair hearing as guaranteed by the Charter of Fundamental Rights and Freedoms (Constitutional Amendment) Act 2011, is unconstitutional, null and void,” Attorney Georgia Gibson-Henlin, QC, argued on Al-Tec’s behalf.

Justice Edwards found the rule to be “one-sided” and “disproportionate”.

“The danger associated with barring a defendant from fully participating at an assessment hearing, which is a trial in itself, is that it creates an avenue that enables a claimant to make one-sided submissions entirely untested,” said the appellate judge.

“The perpetual silence that the defendant must maintain on all issues relating to quantum, gives a claimant the unfettered opportunity to claim unreasonable and exorbitant sums, which, had the defendant been allowed to speak, evidence or submissions or both, could be presented to the court as to the reasons why a claimant is not entitled to the sums claimed,” she said.

Edwards noted that where the claim is for an unspecified sum, damages must be assessed and that means a hearing must be held before a judge, who must hear evidence.

“In a claim involving unspecified damages for which a hearing must be held, as in the present case, barring a defendant from actively participating in such a hearing by cross-examining witnesses and making submissions is not demonstratively justified in a free and democratic society. Rule 12.13 of the CPR is, therefore, unconstitutional,” she ruled.

The court also handed down a similar judgment for Rule 16.2(2) of the CPR, which only provides for notice to the claimant only, saying it amounts to a breach of the audi alteram partem rule. The Latin phrase translates to “let the other side be heard as well”.

Hogan and Lattibudaire were represented by Nigel Jones and Kashina Moore of Nigel Jones & Company, while Carla Thomas and Tamara Dickens represented the Attorney General’s Department.