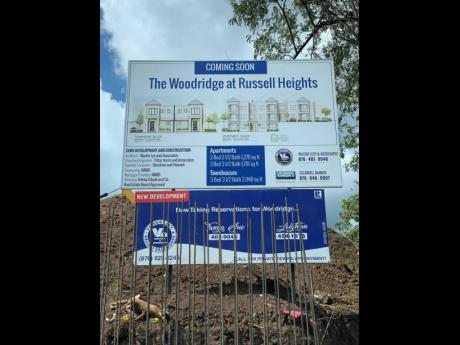 J ason Smith, a second-generation housing builder and CEO of Core Development and Construction, has begun construction on what he says is the second of four upscale residential developments to be rolled out across Kingston being done over time.

The current project, called Woodridge at Russell Heights will comprise 10 town houses and seven apartments. The first was Palms of Durham, comprising 21 apartments near Liguanea, which was finalised in November 2015.

While Smith says the units in the four developments will be placed on the market at prices ranging between $30 million and $60 million, he is not saying how much he plans to invest. The current project is costing “several hundreds of millions,” he said. Delivery of the units is scheduled for the first quarter of 2020.

Core Developments is a six-year-old company through which Smith began branching out on his own after working in the family business, Windsor Commercial Land Development, from age 16.

The developer said, altogether, he has worked some 35 years in construction and mining.

CORRECTION: This story has been updated to remove incorrect information that JMMB Bank was financing the development.