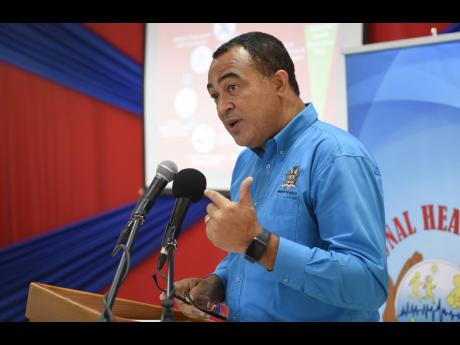 Gladstone Taylor
Minister of Health Dr Christopher Tufton speaks at the contract signing for the development of a national health plan for Jamaicans on December 6, 2017. The green paper on unviersal health care has now been tabled in Parliament for public discussion.

Eight out of every 10 persons do not have access to private health insurance. This was one of the many things that I clearly recall after many readings of the Ministry of Health & Wellness’ 28-page green paper: National Health Insurance Plan for Jamaica.

Those two numbers provide an indication of the scale and complexity of the problems that will face the ministry as it moves into the project implementation phase. The ongoing road construction projects, collectively called the Major Infrastructure Development Programme will probably prove to be less difficult and disruptive to execute than NHIP.

The proposals reminded me of the article that I wrote on the subject – Actionise move towards universal health care – a few weeks before the February 2016 general elections. A sentence in it read: “Aspirants to political office should be talking about policies to achieve universal health coverage at their rallies instead of prancing about on platforms and spouting lyrics that promote violence”.

With that history and, when it is coupled with this column’s aim to disseminate information about risks and insurance, I believe that I would be doing a disservice to readers if I didn’t offer any comments on what MOHW says in the foreword to the paper is the “most transformative reform”. Its aim is to “increase overall resources for the health sector; increase efficiency in the use of available resources; promote sustainable health care financing and improve the quality and coverage of health services” that are delivered to residents of this island.

The drafters of the green paper have not learned at least one important lesson from the US Affordable Care Act experiment, called Obamacare. This is about the need to use easy-to-understand language in executing its communication strategy. Simple language would help to explain the contents of the proposal and explain details about the basic plan.

First-year law and medical students at the two tertiary institutions in Kingston 6 and 7 and some of the MBAs working with private health insurance providers will have difficulty understanding the paper if my experience with the document was used as an example. The paper does not encourage public feedback.

The World Health Organization, WHO, identified three obstacles that countries like Jamaica face in moving towards universal health coverage: the availability of resources; over-reliance on direct payments; and inefficient and inequitable use of resources. Given the stated aims of the proposed reforms, it seems clear that MOHW has found ways to get around the barriers. It should be congratulated on taking concrete steps towards implementing an idea that first appeared on the national agenda nearly 90 years ago.

Here are some important facts to consider.

Funding of the public system has been about half the recommended level for many years.

WHO estimates that 20-40 per cent of health resources are wasted.

Approximately 19 per cent of the population has private insurance, while another 25 per cent – approximately 500,000 persons – have disease-specific coverage prescription drug benefits under the National Health Fund. NHF is financed partially by taxes on tobacco and liquor.

For its 2017/2018 financial, NHF year paid $4.8 billion in benefits. Six conditions accounted for 81 per cent of those expenditures. Private health insurers paid $16.9 billion in claims for the 2016 calendar year. Hospitalistion, surgery, doctors’ fees, laboratory and X-rays, and prescription drugs accounted for nearly three-quarters of those costs.

Despite the removal of user fees at public hospitals, out-of-pocket expenditures for health care remain high at 28 per cent as compared to other countries.

The paper says that “international experience has shown that when OOP [out of pocket] expenditure is above 20 per cent, families are at a greater risk of catastrophic health spending and impoverishment because of an episode of illness”. For example, it is estimated in the US that there are “nearly 45,000 annual deaths are associated with the lack of health insurance,” according to a study published in October 2018 by the American Journal of Public Health.

The ‘technical’ section of the green paper was very, very difficult to understand. When I wrote “Health-care funding a complex undertaking” on February 12, 2017, I reviewed the contract of a private health insurance provider in the United Kingdom. It was huge but very user-friendly – nothing like those that are available on the local market. The drafters of that document made strenuous attempts to explain the benefits that were offered and what was excluded.

While I have a sense of the structure of the basic benefits that NHIP will offer, I do not feel comfortable enough to try to explain them to readers or to describe how those benefits will or can be integrated with those of persons who subscribe to existing plans that they pay for or are paid for by their employers.

From my experience, problems with all kinds of insurance often arise because insufficient attention is paid to communicating about the details of coverage to prospective policyholders during the pre-contract stage.

The Financial Service Commission’s recently revised market conduct guidelines prove this. NHIP offers too much promise to the thousands of citizens across the island to make a similar kind of mistake that private health insurers made, especially when it is in the process of seeking feedback.

Finally, and to demonstrate this column’s commitment to helping find solutions to complex national problems, I’ll be sending some additional comments about NHIP that I received from one of the Caribbean’s leading experts on health insurance. MOHW: The ball is now in your court.