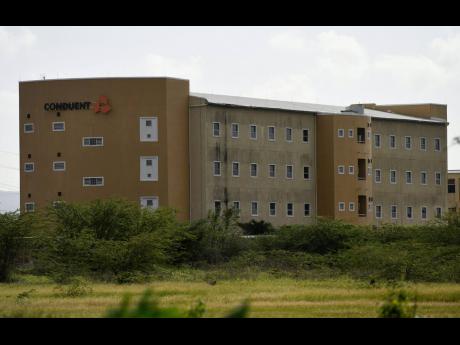 Ricardo Makyn
The Conduent Jamaica complex at Naggo Head, Portmore, is seen November 11, 2018. The American company is expanding its operations in Montego Bay, with the addition of 75,000 square feet of space under construction at Barnett Tech Park and due to be finalised by early 2020.

Call centre operator Conduent Inc will be expanding its Jamaican operations, a plan that is expected to lead to around 2,000 new jobs by early 2020.

The size of the investment was not disclosed, but it appears to be substantial.

Robert Corbishley, a spokesman for Conduent Inc, says the American company plans to add 75,000 square feet to its facility at Barnett Tech Park in Montego Bay either later this year or in early 2020.

“The new space could have as many as 2,000 additional seats and training rooms,” Corbishley said. In the call centre market, a seat is considered the equivalent of a job.

Shelly-Ann Josephs, general manager of Barnett Limited, said an affiliated company within the Barnett Group is doing the construction, which started in November 2018 and should end in November 2019. The development is costing US$9 million, she said.

“This is just one of the buildings they will lease from us. It’s 75,000 square feet, three storeys high,” Josephs added.

She said that Conduent currently occupies space in three other buildings in the tech park, totalling 125,000 square feet.

The new building will bring the total occupied by Conduent to 200,000 square feet. Josephs said the business process outsourcing firm is developing ‘a western Jamaica campus’ in order to benefit from economies of scale.

Conduent Inc was created in January 2017 when Connecticut-based Xerox Corporation spun off its business process outsourcing operations into a new subsidiary.

New Jersey-based Conduent, which is listed on the New York Stock Exchange, currently employs 5,000 people across the three centres it operates in Jamaica at Barnett Tech Park, Portmore, and Kingston.

Corbishley said the company had concluded a three-year cost transformation programme that began in mid-2016, under which Conduent exceeded its targeted US$700 million of savings by approximately US$30 million.

The mid-2016 reference relates to the date that Xerox Corp announced the spin-off of its Xerox Business Services division into a wholly separate corporation, constituting the operations of business services company Affiliated Computer Services, ACS.

Conduent offers digital platforms for businesses and governments. It has 93,000 employees in more than 40 countries, including Jamaica. Conduent Inc, in its full year results for 2018, reported a fall in revenue from US$6.6 billion to US$5.39 billion, which CEO Ashok Vemuri attributed to a new accounting standard and the costs of the divestiture.

“Conduent has made enormous progress – standing up a public company, driving a significant transformation programme in a relatively short period of time, laying the foundation to become a digital interactions company, and resolving the legacy issues we inherited,” Corbishley told Financial Gleaner.

He did not state Jamaica’s ranking but said that it is one of Conduent’s largest service centres and one of four key locations targeted for growth.

Corbishley said that the unit in Jamaica that serves the aviation sector has more than 1,000 customer contact agents, who support one major airline on a 24-hour basis. The team, which is expected to grow this year, receives training to handle flight bookings, cancellations, and other queries, as well as baggage-related queries relating to weight, cost, lost luggage, and more.

The contact agents are also expected to understand the airline’s loyalty points system to purchase plane tickets, use of points with other partners, password creation and reset, and purchase of additional loyalty points.

Conduent Jamaica otherwise has over 730 employees engaged in finance and accounting services that support North American clients with payroll processing and other back-office accounting tasks and another 900 employees that provide technical support for large North American technology and transportation companies, Corbishley said.