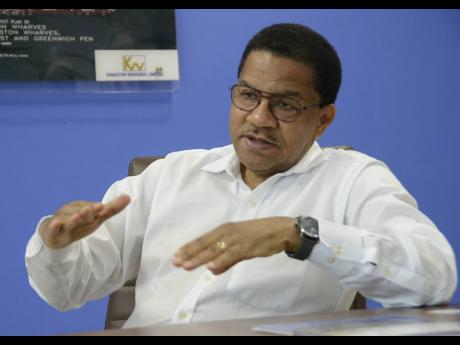 Kingston Wharves’ car-transhipment business has outgrown the 18 acres of land it leased at the Tinson Pen aerodrome and filled up another 15 acres it bought near the wharf devoted to motor vehicle storage.

And company officials are predicting even more growth, with headway now being reported on its two-year-old application for designation as a special economic zone, SEZ.

“A few weeks ago, we received notification of provisional approval from the SEZ Authority, and we are supplying additional information,” said Grantley Stephenson, CEO of Kingston Wharves Limited.

The designation comes with lower tax rates and other benefits.

But company officials were tight-lipped about their precise plans, which aim to top the near 100,000 car moves done in 2018 and add another dimension to the service they provide to major auto shipping lines including the Norwegian Hoegh Auto Line, one of the world’s leading motor vehicle carriers, as well as other carriers NYK, Eukor, Glovis, K-Line, and Mitsui.

Since the start-up of motor vehicle transhipment by KWL, Hoegh has relocated its Americas hub from Puerto Rico to KWL’s port facilities in Kingston.

Cars for the domestic market are stored at the KWL Auto Logistics Centre set up at Tinson Pen in 2017. The vehicles for transhipment to other countries are handled portside, that business having started in 2009. The operations are assisted by a web-based software that allows clients to stay anywhere in the world and keep track of the movement of their motor vehicle inventory.

“The car business is a success story for us and is now one of the most profitable business segments,” says Stephenson, who recalled that there were many persons who were doubtful about the venture’s sustainability when KWL entered that line of business some 10 years ago.

“We are exporting cars to 29 countries today. It has been phenomenal. It has expanded so much that we are now exporting vehicles to Australia and New Zealand. We bring cars from South Africa on the Hoegh.”

The business keeps growing, the KWL boss reports. Since March, a new phase has seen bulldozers and heavy equipment being exported from the United States through KWL’s port to Australia and New Zealand.

The auto logistics hub, Stephenson adds, has not only been beneficial but has also given motor vehicle dealers in Jamaica the capacity to extend their dealership service Caribbean-wide.

The KWL chief executive explains that the motor vehicle transhipment business has been made more dynamic by the global diversification of car-making following a series of earthquakes in Japan. “A lot of the vehicles are not made in Japan any more because they are minimising risks. Suzuki makes vehicles in India and what was Yugoslavia. Toyota makes some vehicles in Thailand and Hondas ­elsewhere,” he said.

Even as KWL, several times voted the Caribbean’s leading multipurpose port, plans for more land space for its growing motor vehicle business, it has also turned its attention to the need for additional infrastructure investment on the port itself.

Several phases of a multibillion-dollar port deepening and expansion in the past had led the way for mega liners such as Hoegh’s vessels to be able to now dock at its facilities. As part of that upgrading, Berths 8 and 9 were deepened and extended 50 feet into the harbour channel.

Plans are now in place for major work on Berth 3 next, with consideration being given to improvements to Berths 6 and 7 down the line. However, Stephenson says before any major additional investments are made, the company is seeking out and will first be tying up contracts for ­additional business.