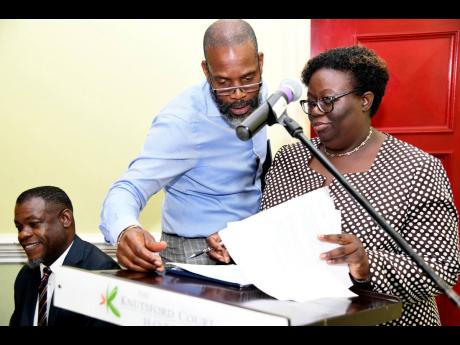 Kingston Properties Limited has applied for special economic zone or SEZ status for its Grenada Crescent, New Kingston multistorey building, which it intends to use to house business processing outsourcing firms.

“The SEZ application is in progress and we are targeting BPO entities to be the major anchor tenants,” according to chairman Garfield Sinclair, who said it will be rebranded KPREIT Building.

“Right now we are actively negotiating four floors with BPO players in the market who are very interested,” he said, adding that “we are moving tenants around in order to get the space required for BPO tenants.”

Last year, Kingston Properties acquired the old Caldon building for $435 million as part of an overall diversification into markets with greater prospects for capital appreciation and net income yields.

That acquisition combined with the disposals of some its condominiums in South Florida resulted in a reduction of United States properties from 50 per cent to 33 per cent of the company’s total portfolio.

The judicious use of leverage during 2018 was advanced by the closing of three attractively priced loan facilities totalling US$5.1 million, Sinclair told shareholders at the company’s annual general meeting at the Knutsford Court hotel, New Kingston on Tuesday.

Despite the company’s increased loan balances, the debt to asset ratio stood at 39 per cent, while loan debt as a percentage of equity stood at 60 per cent.

Sinclair said Kingston Properties paid in excess of 76 per cent of profit as dividends to its shareholders last year and resumed its share buyback programme initiated in 2014, which enhanced its book value per share based on the average repurchase price.

Chief executive officer Kevin Richards said that with the acquisition of the New Kingston building, Kingston Properties’ holding in the office rental space moved from seven per cent in 2017 to 27 per cent in 2018.

Noting that the acquisition is in line with the company’s strategy of diversifying into other markets and asset sub-classes, he said “Jamaica is a market we believe has strong potential for positive upside in the near to medium term while providing more competitive yields.”

Last year, Kingston Properties earned $204.1 million in rental income, and according to Sinclair, “our strategic plan is to become a $10-billion company in the next three years”.

Responding to a question from a shareholder, Sinclair said “we are actively pursuing additional investments in the Cayman Islands”, where Kingston Properties has invested in one property.

However, he cautioned that “it’s not easy in that the regulatory environment in Cayman Islands makes it very difficult for outsiders to invest” in that country.

Outlining what they were required to do when they acquired the property in the Cayman Islands, Sinclair said if they are going to buy another property there “we will have to go through the same experience … all of the hoops you have to jump through you have to do it all over again”.

However, he said they were working on ways to make the process more efficient and smoother.

Sinclair said, “ we are focusing now on diversifying investment in the Caribbean which are markets that are growing. “

He said the company was also eyeing markets in other places in the region, including the Bahamas, Panama, the Dominican Republic, Turks and Caicos Islands, and Puerto Rico.