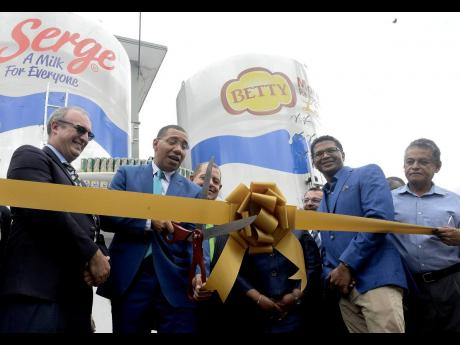 A new deal inked with three regional Nestlé businesses and others being considered with companies in Latin America position the Serge Island dairy operation at Bog Walk, St Catherine, to achieve full utilisation of its manufacturing capacity.

Seprod CEO Richard Pandohie said Tuesday that production of its own brands have brought the factory to 30 per cent of the line’s capacity, but with the pending rollout of two brands for Nestlé, this will double to 60 per cent.

The other deals pending are expected to use up the rest of the capacity, but Pandohie did not disclose the names of the Latin American prospects with which Seprod is in talks.

Three years ago, Seprod purchased the dairy-processing factory in Bog Walk from Nestlé which ceased manufacturing in Jamaica. Acquisition costs and upgrades, including new product lines and quality systems put in place, amounted to $7 billion. The cost also covered consolidation under the Serge Island Dairies marque.

Seprod has shuttered its other dairy-processing factory in St Thomas, with Pandohie noting that it did not make sense to run two factories. Now, the focus of the company is to keep the manufacturing operation going around the clock in order to maximise returns.

The partnership with Nestlé– signed in March with Nestlé Jamaica Limited, Nestlé Trinidad and Nestlé Caribbean Incorporated – is a marketing and distribution arrangement under which Seprod will produce the two milk products and Nestlé will distribute them in Jamaica, Trinidad and Tobago, and other Caribbean markets.

Both Seprod and Nestlé are targeting global exports in the medium term.

Seprod chairman Paul ‘PB’ Scott said employment at the Bog Walk factory, over three years, had tripled from 100 to 300, and that the production facility had the capacity to employ 600 on shift.

Pandohie told the Financial Gleaner that international packaging company Tetra Pak was working with Serge Island Dairies to introduce a mother farm and cluster concept, under which farmers will be incentivised to produce more milk.

Seprod will assist with inputs such as cold storage and farmers will repay the loan for start-up capital with milk, he said.

It’s part of the national programme in which Serge is a participant and which initially aims to raise the production of milk from 20 million litres to 60 million litres.

Seprod bought the Supligen and Betty brands from Nestlé three years ago. One year later, the companies started talks over manufacturing other products for regional distribution.

The Nestlé companies , which are Swiss owned, currently import other Nestlé-manufactured products from other regions, including from Peru.

“They import all their products from their global supply chain and also from their factory in Trinidad. The condensed milk will be their first locally produced product since their divestment of the Jamaica factory,” said Pandohie.

Additionally: “We are in a very advanced state of discussion with other potential partners in Latin America to produce brands for them,” said Pandohie. “We are building our factory in two ways: one by producing our own brands; and the other by producing brands for other people. When you have a manufacturing facility, the key is to keep the plant running,” he said.

Seprod has started exporting its own dairy brands, including Supligen, to the United States, United Kingdom and Nigeria. Pandohie will also be presenting a plan to Seprod’s board – three new factories to produce gluten – free flour from cassava for export – for approval. He noted that each factory was likely to cost over $100 million.

The three facilities are to be located close to farmers of the input crop in three separate locations, including St Thomas and St Elizabeth. The third location is under review. The cassava flour plan would require thousands of acreages for the planting of the tuber by a network of small farmers on which Seprod would rely.

The company is also going into the production of coconut water at Bog Walk; and banana porridge for the national school-feeding programme, for which a memorandum of understanding has been signed with the Banana Board, Pandohie said.

Prime Minister Andrew Holness and Minister of Industry, Commerce, Agriculture and Fisheries Audley Shaw, both of whom spoke at the launch of the integrated dairy plant, noted that growth in agriculture was key to national economic growth.

Pandohie said that what the company was trying to achieve would not be possible without help from the Government in terms of extension services for farmers.