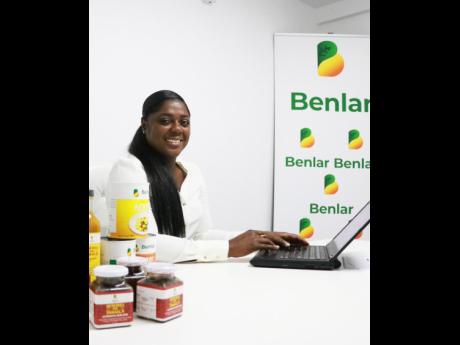 For Benlar Foods, life after the business lab incubation in 2016 has been less glitzy than the full-colour feature on Branson’s virgin.com website with its trademark bright red motif. But Benjamin is undaunted.

Faced with an absconded former business partner, high overheads, an unfinished factory building, a multimillion-dollar debt, sagging production and small margins, the businesswoman upended her business plan, shed some large but frugal contracts, wooed new investors who pumped $45 million into completing a food-processing plant, and then she made a beeline for a more lucrative value-added niche at the higher end of the global food market.

Buoyed by a fully outfitted processing factory that started operations in Mandeville three months ago, Benjamin, a supply chain management strategist, is faithful to her core business mandate of producing to First-World standards, organic foods with full traceability at every step of the production and distribution cycle.

The $45-million processing plant has been made possible by a new injection of capital by two unnamed equity partners from Jamaica and the United Kingdom, who have taken a 25 per cent stake in the company, which Benjamin says is now valued at more than $450 million – investments, factory, equipment, farm operations and intellectual property considered. The other 75 per cent is controlled by her.

Following its 2015 start-up out of pocket, Benjamin says the business, which has seen investments of about $70 million to date, was boosted by a loan of just over $5 million from EXIM Bank Jamaica. Contracts were also secured with several hotels and fast-food restaurant chain Burger King, among others.

However, the purchasing policy of these clients, based as it was on sourcing food inputs at wholesome rates and with a long payment turnaround in the case of the hotels, was incompatible with the earning projections and proved incapable of sustaining the business or providing room for growth.

Troubles with a business partner, who Benjamin says migrated and had to be removed as a shareholder and director, combined with other factors, created a close call that almost sounded the death knell for the business.

Faced with a ‘valley of death’ scenario, not uncommon to new start-ups, it was either liquidation or a major overhaul for the business. Benjamin chose the latter.

With advice and what she says is a small grant from the Development Bank of Jamaica (DBJ), plus the appointment of a trustee to help manage the business’ financial affairs, Benlar Foods was given a different strategic direction and new lease on life by its founder. The DBJ funds were utilised for hazard analysis and critical control points, or HACCP food-safety specification of the processing plant.

The factory is the linchpin in the revamped business plan that focuses on more processed and packaged foods for the local and overseas markets. The plant is supplied by a 100-acre farm, leased with an option to buy, in Luana, St Elizabeth. There, farmers, organised as part of a mother farm cooperative, grow produce to specifications set by Benlar Foods and are guaranteed a market. The farm is served by its own well for irrigation and is organised different to a previous arrangement that saw individual contract farmers supplying Benlar Foods.

“Initially, we had started out with our own production, but because production required so much investment, we started to pool with other farmers to satisfy the market. That is not sustainable, because the farmers are not so steady with supplies, even when they have a contract,” said Benjamin, while explaining the current arrangement.

“So, with the model we have in place now, we provide the inputs, the farmers come in, farm as a group, sell the produce to me, and to other markets as long as my volumes are being covered, and pay themselves as a group,” she said, “I benefit from the assurance of supplies and getting the produce at below market price. The farmers have a vested interest in each crop, and so this model is more sustainable.”

In Jamaica, Benlar Food products, which include packaged vegetable soup mixes, chopped vegetables and ready-to-eat fruits, have been on the shelves of PriceSmart supermarket in Kingston since February of this year and five Hi-Lo Food Stores since March.

“Production is not the issue, but rather the marketing spend required to build out the logistics to get into all the stores at once,” says Benjamin of the gradual buildout into the Hi-Lo space, where Benlar Foods has a contract to supply all 13 stores in the chain owned by conglomerate GraceKennedy.

Arrangements are being concluded, too, to supply prepared foods to the KFC and Island Grill quick, service restaurant chains. Island Grill is interested in the package to pot pumpkin soup mix. An e-commerce platform is also being built and is to be supported by a delivery service.

“The real vision is to transform the local market by offering value-added and prepared food to retail outlets as much as possible, while building out the international business,” Benjamin said.

For the planned foreign market foray, an international business division of the company, Benlar International, is now being established and is expected to be launched within the next two months, Benjamin says. Focus will be on penetrating the Caricom and Canadian markets.

In its international push, Benlar is being assisted by an export-specific grant from the We Export Caribbean Programme of the Caribbean Export Development Agency. We Export assists Caribbean women in business penetrate the global market.

Benlar Foods has had the benefit of mentorship, training and grant funding from the major United States fresh produce supplier, Pacific Coast Fruit Company in Portland, Oregon. Benjamin visited and was paired with the company in 2015 as part of the Young Leaders of the Americas Initiative of President Obama. The Benlar Foods business plan now being tweaked was first developed by Benjamin as part of that programme.

Pacific Coast has also provided Benlar Foods with some processing equipment and trained the Jamaican outfit’s staff of 10 in sanitary and phytosanitary food-safety protocols.