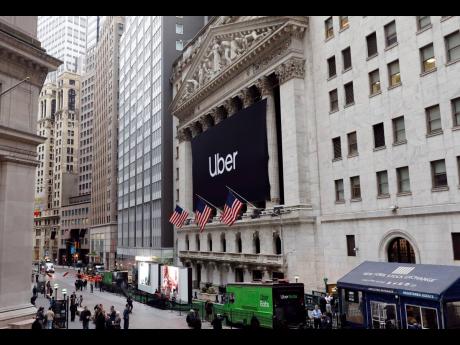 The Associated Press
In this May 10, 2019 file photo, an Uber banner hangs on the facade of the New York Stock Exchange. Uber is continuing to bleed money even as it posts dramatic revenue growth.

Uber is continuing to bleed money even as it posts dramatic revenue growth.

In its first financial report since its lacklustre début on Wall Street, Uber said on Thursday that its revenue rose to US$3.1 billion in the first quarter of 2019, up 20 per cent from the same time last year, beating expectations of analysts polled by FactSet. But the ride-hailing giant posted US$1 billion in losses as it fights to maintain its share of the market.

San Francisco-based Uber, like its main United States competitor Lyft, has spent heavily on rider promotions and driver incentives to gain market share, one reason the companies have struggled to reach profitability. Both are dealing with intense competition, high costs to pay drivers, increased regulation by cites, and a long, ­uncertain road to the development of autonomous vehicles.

“Our investments remain focused on global platform expansion and long-term product and technology ­differentiation, but we will not ­hesitate to invest to defend our market position globally,” said Nelson Chai, Uber’s chief financial officer, in a statement.

Chai added that Uber noticed less aggressive pricing by its competitors, and that trend has continued into the second quarter.

CEO Dara Khosrowshahi said customer engagement across Uber’s platform was higher than ever, with an average of 17 million trips per day.

“Earlier this month, we took the important step of becoming a public company, and we are now focused on executing our strategy to become a one-stop shop for local transportation and commerce,” Khosrowshahi said in a statement.

Uber went public three weeks ago, and its shares have been trading below its IPO price ever since. In Uber’s first day of trading, the company’s market value took a US$617 million hit, the largest loss on the first day of trading by a US-based company in recent history, according to Renaissance Capital.

Uber’s food delivery business – Uber Eats – grew rapidly in the first quarter, with gross bookings, which represents all the money Uber collects on the platform except for tips, doubling over the course of the year. The service raked in US$536 million in revenue, up 89 per cent from the same time last year.

Asked during a conference call with investors about potential mergers in the food-delivery business, Khosrowshahi said that Uber would consider playing a role in industry consolidation if it makes sense for its shareholders.

“Sooner or later we will be the biggest player on a global basis,” Khosrowshahi said.

Uber is being aggressive about tying its various services together, Khosrowshahi said. The company is reaching new customers through its Uber Eats and new mobility products such as scooters that haven’t used the ride-hailing business before.