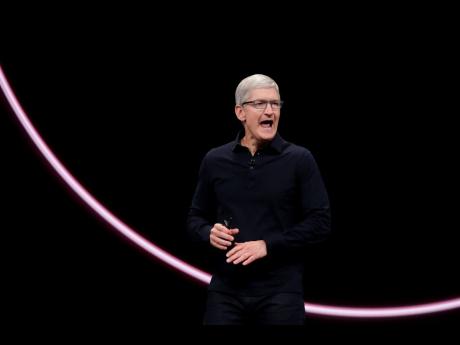 Apple CEO Tim Cook kicked off a keynote Monday that previewed upcoming changes to the company’s phone and computer software, some intended to help it diversify to offset eroding sales of its bedrock product, the iPhone.

Many of the software updates are expected to be tailored for digital services such as video streaming that Apple is rolling out to lessen its iPhone dependence.

Although still popular, the iPhone is no longer reliably driving Apple’s profits the way it has for the past decade. Sales have fallen sharply for the past two quarters, and could suffer another blow if China’s government targets the iPhone in retaliation for the trade war being waged by President Donald Trump.

Apple emphasised its privacy protections during the keynote – following along with Facebook, Google and other major tech companies’ scripts this year.

In its new operating system iOS 13, the company is introducing ‘Sign in with Apple’, which offers iPhone users a way to bypass Facebook’s and Google’s sign-in services when using new apps.

It’s for those worried about letting Facebook and Google build bigger profiles on them by tying all their activities under their Facebook and Google accounts. Instead, Apple is introducing a competing sign-in service – and promises to be more respectful of privacy. Among other things, Apple will mask your real email address when you sign in and give apps a random string instead.

Apple is also offering users the ability to share location with apps just once, and not continually. And it will block apps from using Wi-Fi and Bluetooth to infer your location.

Another potential problem looms for Apple. Regulatory complaints and a consumer lawsuit both question whether Apple has been abusing the power of its iPhone app store to thwart competition and gouge smaller technology companies that rely on it to attract users and sell their services.

Apple is trying to adapt by squeezing money from digital services tailored for the more than 900 million iPhones currently in use.

Of course, the company hasn’t totally abandoned the iPhone. The newest version of Apple’s iPhone operating system, iOS 13, will feature a dark mode and faster tools, including a facial unlock that Apple says will open your phone 30 per cent faster.

Apple also unveiled several new apps for its smart watch, including independent apps that don’t rely on the iPhone. And the company is breaking up its iTunes software for computers into three apps: Apple Music, Apple Podcasts and Apple TV.