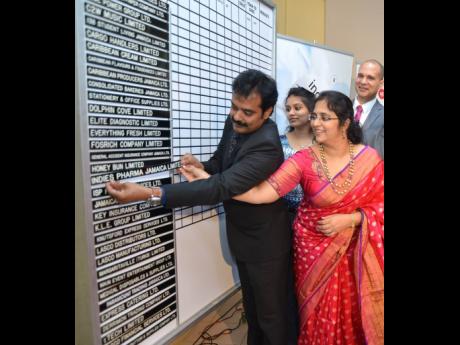 File
Guna Muppuri (left) and Vishu Muppri insert the Indies Pharma strip on the listing board of the Jamaica Stock Exchange in August 2018.

Earnings per share at the company climbed to three cents in the quarter, up from two cents a year earlier. Over six months, profits equated to six cents per share, up from four cents.

The debt-free company also operates with a relatively high working capital ratio, with $8.99 of current assets to every $1 of liability.

“Indies Pharma Jamaica Limited retired all its loans, when compared to the equivalent period in 2018. The company currently has no debt, which indicates its good financial health and shows that it is in a good position for future growth,” said Vishnu Muppuri, co-founder and chief operating officer at the company.

Indies Pharma paid off $53 million in loans with the bulk going to First Global Bank and the remaining $1.1 million to National Commercial Bank Jamaica, its financial report indicates. The company, which went public in 2018, held some $190 million in debt at its listing on the junior stock market. The debt reduction resulted in a 70 per cent drop in liabilities year on year.

The company generated $197 million in revenues for the second quarter, up 29 per cent. Its gross profit hit $133 million compared with $95.3 million a year earlier. Its profit before tax totalled $32 million, compared to $37 million in 2018. Profit after tax was recorded at the same $32 million, up 18 per cent from $27.7 million in 2018, as newly listed companies on the JSE Junior Market qualify for 10 years of income tax breaks.

The company, which set up a new headquarters in Montego Bay, incurred an 80 per cent rise in expenses during the quarter at $99.8 million, compared to $54.6 million a year earlier.

Shareholder equity increased by $276.2 million to $646.7 million, as a result of the company’s junior market listing on the Jamaica Stock Exchange, as well as the rise in retained profits.

The husband-and-wife team of Dr Guna and Vishnu Muppuri hold 664.7 million shares and 378.1 million shares, respectively, in Indies Pharma. Their combined stake amounts to roughly 78 per cent of the 1.3 billion shares issued by the pharmaceutical distribution company. The company paid dividends of $106.6 million in February.