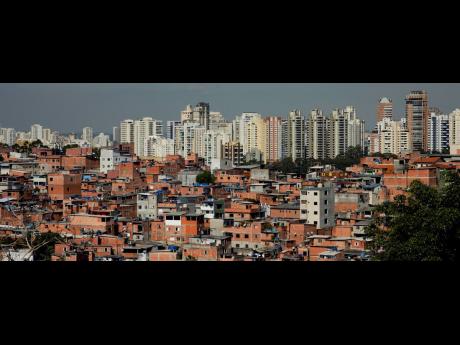 The Associated Press
This May 22, 2019 photo shows brick and block brick houses of the sprawling slum of Paraisopolis stacked next to the posh Morumbi neighbourhood in São Paulo, Brazil. 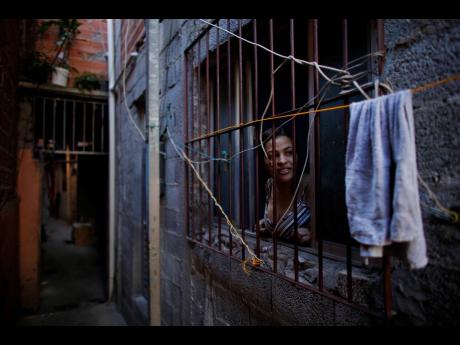 The Associated Press
In this May 22, 2019 photo, Micaela da Silva Santos, an unemployed hairdresser, talks to a neighbor, at the Paraisopolis slum in Sao Paulo, Brazil. Da Silva Santos, a single mom with one child, has been unemployed for six months.
1
2

Elizabeth Leite de Souza looks worn out. She’s been looking for work for more than three years, and still hasn’t found it. She and her husband get by on about $300 a month he earns as an informal construction worker and a little government help, like the milk distributed to vulnerable families.

“Everything keeps getting more expensive. We have nothing left. There’s just money enough to eat,” she said.

Yet her sprawling slum neighbourhood of Paraisopolis, a Lego-like scattering of brick and block homes along narrow, labyrinthine streets, sits almost in the shadow of the posh Morumbi district, where apartment towers are topped with helipads that let wealthy executives avoid the tangled traffic below.

It’s a contrast that is becoming ever starker in Brazil’s stagnant economy.

A study released this month by the Getulio Vargas Foundation found that the key measure of income inequality has reached its highest level since the series began seven years ago, with Brazil among the most unequal nations in a broader region where the gap between rich and poor is notorious.

The research organisation’s study found that the income of the richest portion of Brazilians has increased by 8.5 per cent over the past seven years, while that of the poorest has fallen by 14 per cent – apparently because higher unemployment has increased competition for low-skilled labour.

Marcelo Neri, economic director of the foundation, said the sharp recession that began in 2014 has been a “concentrator of wealth”. Gross domestic product, GDP, fell by more than 7 per cent in 2015 and 2016, and it rose by only one per cent over the past two years.

Poverty has been increasing too. The government’s Geographic Institute calculates that 54.8 million Brazilians live in poverty, about 26.5 per cent of the population.

“The great victim (of the recession) is the extremely poor population, with little education, black, that lives in the north, the northeast and on the peripheries of the great cities,” Neri said.

He said the inequality has stifled growth because the poorest, most vulnerable sectors of the population are those who consume the most.

Programmes like income supports for the poor, introduced by the previous left-wing governments, haven’t been expanded to counter the economic slide, Neri said. “Brazil forgot to take care of its new poor.”

Investors had hoped that new, right-wing President Jair Bolsonaro, who took office on January 1, would quickly revitalise the economy with market-friendly policies. So far, there’s been no take-off. The Economy Ministry last week downgraded its projection of GDP growth for this year to 1.6 per cent from 2.2 per cent.

Agnailza de Jesús, a 38-year-old mother of two, has tried to cope with the crisis by converting her living room in Paraisopolis into a beauty salon because she hasn’t found other work.

“I had never been unemployed for six months, the most was one or two months, and somebody would tell me about or I would see a job notice and I would get it,” she said. “Now it’s very difficult. There are many people without work.”