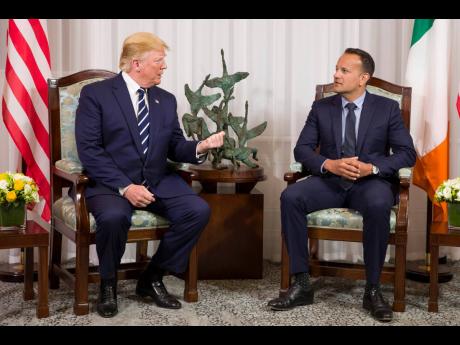 President Donald Trump speaks before a meeting with Irish Prime Minister Leo Varadkar, at the Shannon Airport, on Wednesday, June 5, in Shannon, Ireland.

For the backdrop to his first official visit to Ireland, President Donald Trump wanted to promote his golf course on the nation’s rocky west coast. The Irish government countered with the grand staging of an ancient castle.

In the end, neither side got what they wanted. The compromise location for Trump’s meeting on Wednesday with Irish Prime Minister Leo Varadkar was the VIP lounge at Shannon Airport, just down the hallway from the food court and duty-free shop.

And the meeting itself was more than just a warm handshake for the cameras, as the two broke sharply on what would be best for Ireland if the United Kingdom were to leave the European Union.

Varadkar has become a vociferous opponent of Brexit, a move Trump supports. Many in Ireland express worry that if the UK does leave, a ‘hard border’ will return between Ireland and Northern Ireland, which is part of the UK, potentially reigniting sectarian tension that lasted for decades and sometimes exploded into violence.

“Probably you’ll ask me about Brexit because I just left some very good people who are very involved with Brexit, as you know,” Trump said in the leaders’ meeting. “And I think it will all work out very well, and also for you with your wall, your border.”

Varadkar quickly retorted: “I think one thing we want to avoid, of course, is a wall or border between us.”

“I think you do, I think you do,” Trump responded. “The way it works now is good, you want to try and to keep it that way. I know that’s a big point of contention with respect to Brexit. I’m sure it’s going to work out very well. I know they’re focused very heavily on it.”

Trump also has one other stop during his two days in Ireland, and it’s not the capital of Dublin or the famed Cliffs of Moher. Rather, it’s his own golf course in Doonbeg, where he will sleep for two nights amid the commemorations of the 75th anniversary of D-Day.

The White House initially proposed that Trump meet Varadkar at the course, as part of the president’s unprecedented blending of government affairs and business advertising. But the Taoiseach’s office balked and proposed a more historic site, before settling on Shannon.

Trump denied on Wednesday that he was simply trying to tout his golf course.

“This trip is really about great relationships that we have with the UK and I really wanted to do this stop in Ireland,” he said when asked about Doonbeg. “It was very important to me because of the relationship I have with the people and with your prime minister.”

The airport lounge was hardly the usual setting for a first meeting of two heads of state, though Shannon Airport does boast the world’s first duty-free shop. It is also a regular stopover for American officials on international flights, since its location on the eastern edge of the Atlantic Ocean makes it an ideal refuelling spot for far-flung trips.

Trump arrived Wednesday after participating in a multinational ceremony in Portsmouth, Great Britain , which followed his two-day United Kingdom state visit in London.