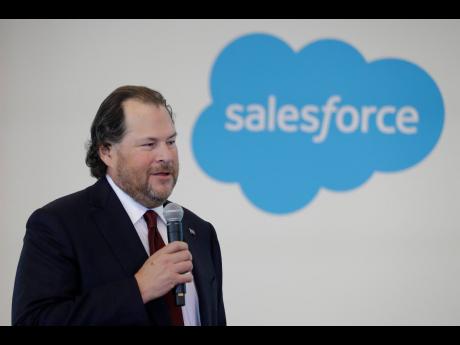 Salesforce, a maker of customer-management software, is buying Tableau Software in an all-stock deal valued at US$15.7 billion.

By scooping up Tableau, which provides easy-to-use tools for visualising and organising data, Salesforce is the latest big tech firm to carve itself a role in helping businesses analyse data and make smarter decisions.

Cloud computing giants Microsoft and Amazon offer similar insights, and Google stepped up its game last week when it announced it was acquiring private data analytics firm Looker for US$2.6 billion to expand its Google Cloud business.

“Instead of having just lines of data, you can press a button and create charts,” he said. “Tableau’s vision has always been it could be as ubiquitous as Excel.”

He said Tableau has been the “premier asset” in the increasingly competitive business intelligence sector, with a rabid following among data analysts. Companies that use Tableau’s services include Charles Schwab, Verizon and Netflix.

Forrester analyst Boris Evelson said it’s become harder for independent business intelligence vendors such as Tableau to remain profitable on their own because the market has matured and bigger companies such as Microsoft can offer lower prices as part of a package. He said Tableau and Salesforce complement each other, and the deal could be successful if Tableau is able to stay “laser-focused” on its core analytics product.

The acquisition is expected to add about US$350 million to US$400 million to Salesforce Inc’s fiscal 2020 revenue. Each share of Tableau common stock will be exchanged for 1.103 shares of Salesforce. The deal was approved by both companies’ boards and is expected to close by October.

The companies said Tableau will operate as an independent subsidiary and stay headquartered in Seattle. Salesforce is based in San Francisco.